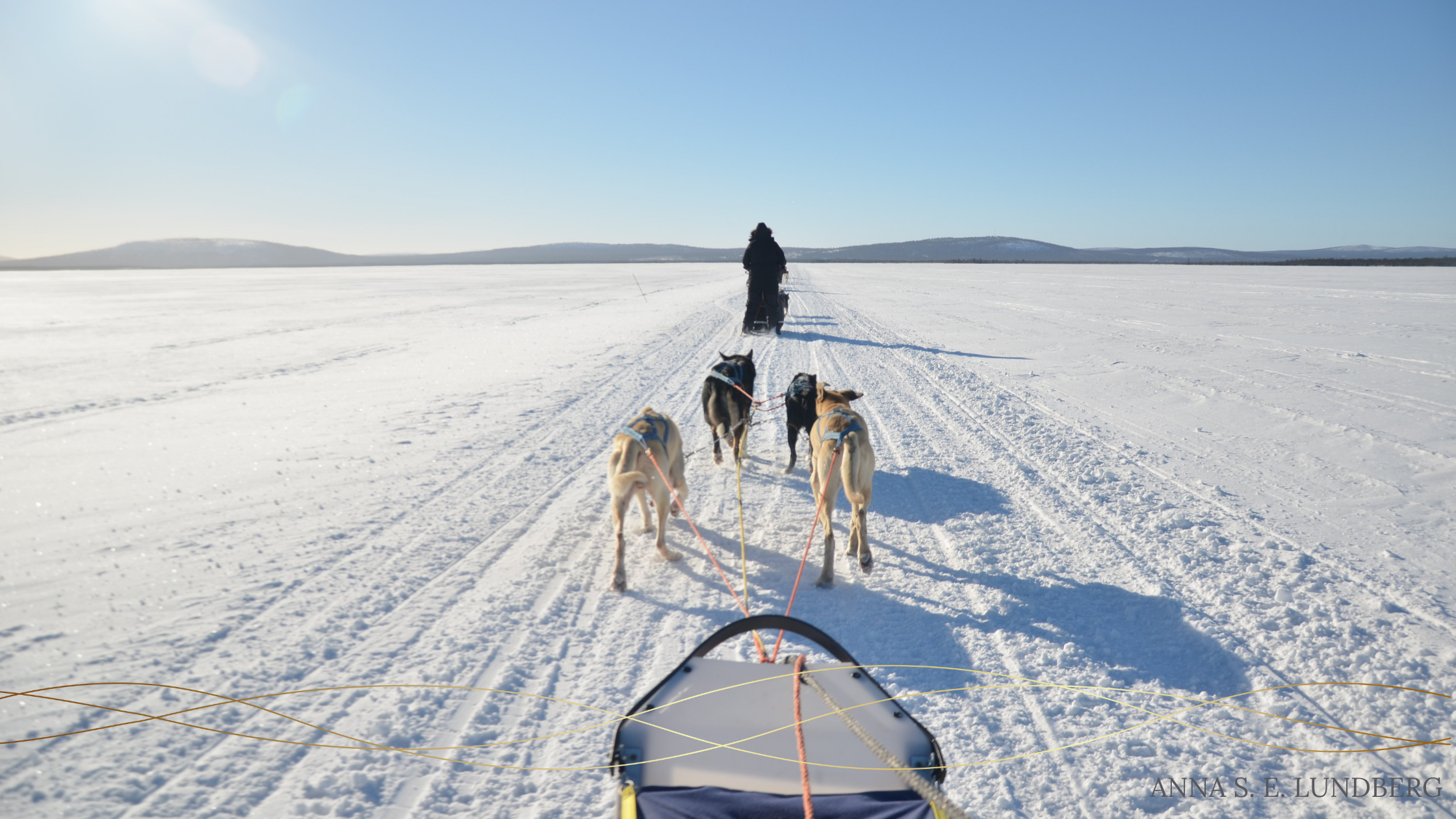 I finally got around to writing up my experience of travelling into the Arctic Circle back in March; and what an experience it was…

It was the stillness that took me most by surprise. The only sounds were the panting of the dogs and the pitter-patter of their paws on the ground, the crunch of the snow against the runners of the sled. A blanket of granulated sugar lay around us, broken up here and there by the evergreen trees. Branches bent over our path under the weight of the snow, creating a portal through which we entered another world; then the landscape would open up and we would be crossing a vast frozen lake. When we arrived at camp, the wilderness cabin where we would be staying for two nights, I was stunned to find out that we’d been going for more than three hours.

We had flown into Kiruna, Sweden’s northernmost town, earlier that afternoon. After a hot lunch and a quick briefing, we were kitted out in our Arctic gear and given a little scrap of paper with the names of our dogs. I was given Miki and the oldest and loveliest of the dogs Tofa in the front, and in the back I had Toby and Balto; before I knew it I was standing on my individual sled with four impatient huskies pulling eagerly at the reins. I lifted my foot off the brake… and we were off! Now, I’m really not a dog person, and I must admit that this was the part of the trip that I had thought the least about (except to imagine sitting down in something more like Santa’s sleigh) – but after this first afternoon of sledding through the frozen landscape of Narnia, I mean Kiruna, I would have happily ended the trip there with no regrets.

That night, we fed the huskies and then ourselves, rewarding ourselves further with some relaxation in the sauna hut. We alternated the roasting inside with sprints out into the snow to cool down, hesitant at first but getting more and more daring with each go, eventually frolicking freely in the snow before heading in to get warmed up. When we were once again fully dressed, we headed back out into the snow for what we had all been secretly hoping for: a chance to see the northern lights. There are trips that focus only on this, chasing the aurora borealis with experts who will all but guarantee a sighting; for us, though, this would be a bonus, on top of an adventure that had already more than delivered.

The night was clear, the stars much brighter than what we are used to back home with all the industrial light pollution that comes with living in the city. Someone spotted a hint of something at the horizon. A cloud? It’s nothing. Then… maybe it’s something? A swirl of light getting slowly brighter, a hint of green, reaching up into the sky. Suddenly: yes! Not a cloud after all. We’re actually seeing them, a whirl of light dancing across the sky, vibrant and alive. Science may explain it all with particles and cosmic rays and solar flares but whatever the cause it is in awe-inspiring sight, a magical moment in the depths of the Arctic wilderness. A short flight and yet a long, long way away from home…

On the second day, the dogs got a break as we went for a cross-country ski. Now I may be Nordic but I do not have a whole lot of experience of Nordic skiing, having only been once, many years ago. Things were made more difficult by the fact that the snow kept freezing on the underside of my skis, providing some welcome traction on the uphill bits but being less helpful when I was trying to actually ski on the downhill stretches. Once I had managed to knock all that ice off with some very aggressive kicking and stomping, it was smooth sailing. Well, not quite… After we’d finally made it to the top of a big hill it turned out that downhill was even trickier. We fell like dominos, laughing with increasing hysteria as we went. How are you supposed to ski on these long thin slippery things?! By the end of the day, some of us having also chosen to do the longer route, we were losing control of our poor fatigued limbs, and having run out of water early on we were eagerly munching on snow just like the huskies. On finally arriving back at the cabin we had a much-deserved sauna and some more arctic rolls; after an also-much-deserved shot of vodka to revive the spirits!

The next morning, we had our second and last day of dog sledding. This time, we were responsible for gathering and harnessing our own dogs, and I think we were all feeling a whole lot more comfortable knowing more what to expect. In fact, when we were nearing the end and travelling through a narrow and windy bit that had thrown a lot of people off their sledges on that first day, this time we glided through like pros. I love how a group of amateurs can get to a sufficient level of skill to enjoy something as random as dog sledding within just a couple of days, or even hours, of picking up those reins.

We finished our weekend with a trip to the Ice Hotel, a complex that is re-designed and re-constructed every year after the “snice” (what an awesome word! It’s a mixture of snow and ice) thaws and melts in summer. We didn’t spend the night in the -6 degree rooms but we did manage a few cocktails from the Ice Bar; a month later, we were drinking from the same glasses in the Ice Bar in London (ice from the Torne River is shipped from Sweden to London for this purpose) where we had an Arctic reunion. It wasn’t quite the same – but the cocktails were still tasty! And, of course, that’s the other thing about any adventure like this: the people you meet are inevitably kindred spirits.

The wilderness weekend was organised by Madoc of Secret Adventures. If you’re tempted, and how could you not be, there will be a new Arctic adventure 21st-24th January 2016. This one is in the middle of winter and likely to give you a more authentic Arctic experience than our blue-skies-and-warm-sun experience in March! You’ll fly to Kiruna via Stockholm with either Norwegian Airlines or SAS and the rest is all organised by Madoc and the team.