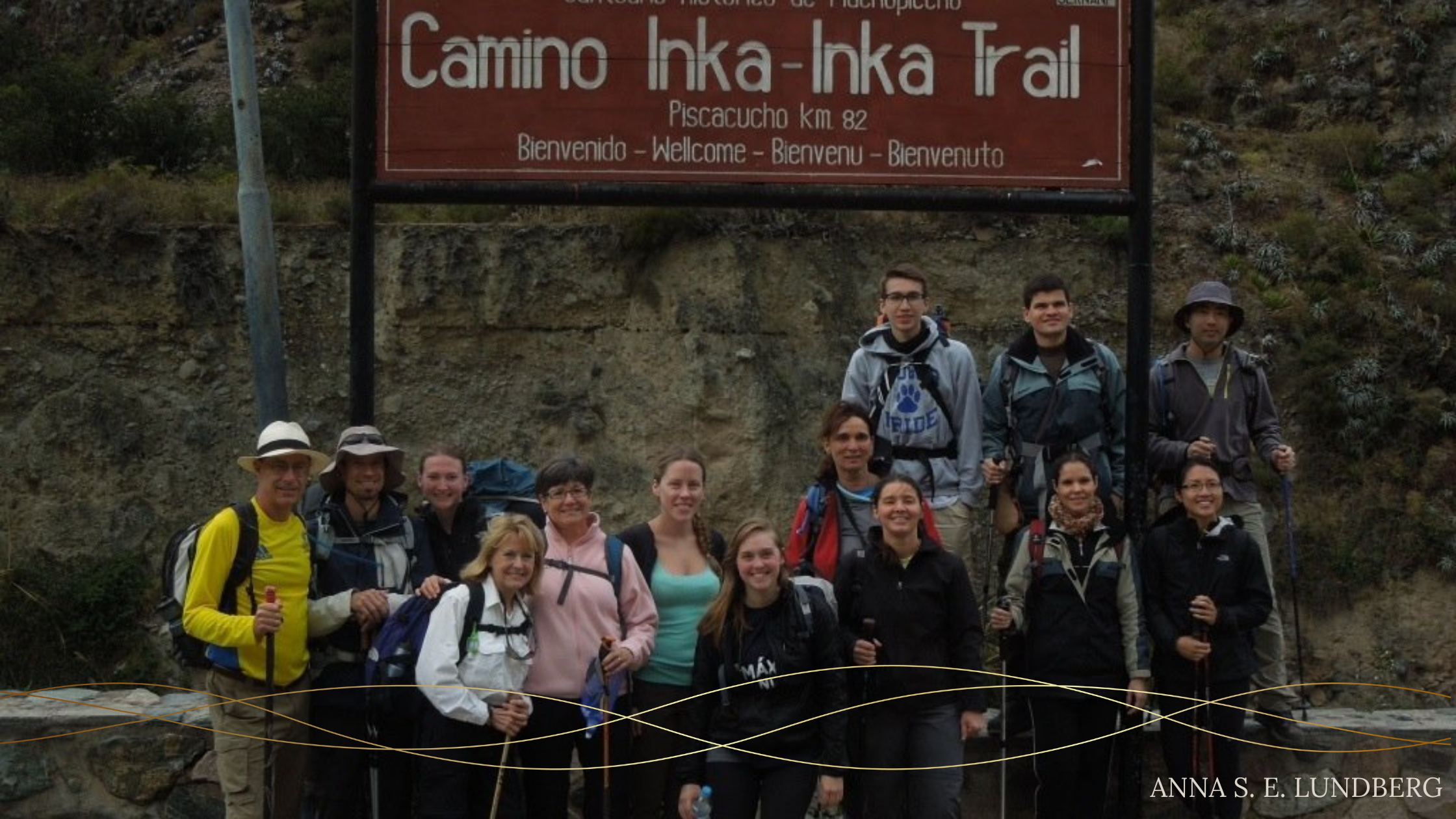 First of all, as I’ve been told now both in Peru and in Bolivia, there is more than one Inca trail – the Inca road system consisted of about 40,000km across the empire. But the famous one on the list of the best Inca places to visit, to which tourists flock, is The Inca Trail, capital I, capital T, the Camino Inca, a four day/three night pilgrimage to Machu Picchu. This is what I had signed up for, the classic route.

The night before leaving, I had nightmares and then couldn’t get back to sleep after 2.30am, anxious and excited about the days ahead. The pick-up was at 5am, with a 1.5 hour drive to Ollantaytambo, a small town at 2,800m that retains its Inca structure, with a huge fortress above. At breakfast, I bought a poncho for 25 soles – it didn’t rain the whole time, so it was a worthwhile investment, I think. We passed adobe houses (they still use the same construction techniques as hundreds of years ago) that had been destroyed in flooding this past February. We also saw a truckload of children being shipped off back home for the weekend – coming from remote villages, they had to travel there for school from the age of eight. From Ollantaytambo, we continued on to Km 82, from where we would start our trek. The 13 other people in my group were super friendly from the start, supportive when someone struggled because of the altitude, and rarely complaining. Our group, though, was bigger than this 14: we had the main English-speaking guide, Ramiro, plus a second Spanish-speaking guide, Hilton; and then we had the porters.

Porters make up more than half of the 500 people who embark on the Inca Trail every day. These are indigenous men, coming from the surrounding highlands and with no more than a primary school education, and this is one of the few jobs for which they are qualified. Their role is to carry our gear – most tourists just carry a small daypack with water, snacks, camera, etc, leaving the sleeping bag, sleeping mat, and extra clothes to the porters – along with the tents, tables and stools, food, and cooking equipment. Just a few years back, there were no regulations, and there would be just four or five porters for a group of our size, carrying as much as 50kg each. Today, the personal things that we give them must not weigh more than 5kg, while the total weight the porters carry may not exceed 25kg; we had 13 porters, including the chef who both cooked and carried. These small men will run past you on the trail with their ‘backpacks’ – more like huge sacks, towering above them. “Porter, porter!” – you’ll hear the warning and you’re advised to back up against the mountain, rather than risk being pushed off the cliff. There was one 21 year old for whom this was his first tour group. At the other extreme, there was a man of 47 who had been working on the trail for 20 years. The oldest were Victor and Victor Raul, at 52.

At the 82km mark, we had our passes stamped at the entrance to the trail, and crossed the Río Urubamba to start our trek. Soon we saw our first ruins in the valley below, Llaqtapata. Our guide, Ramiro, gave us all the history of the sites but also showed us the local trees and plants along the way. My favourites were the yellow dancing lady orchids and lady slippers, and the purple flower, forever young (my flower!). The last stretch of this first day seemed to never end, but the satisfaction of reaching camp was worth it. I was first to camp that day and the following days too. Ramiro said, “It’s not a race” – pff! (Luckily, I didn’t have problems with the altitude. My large ribcage, which has otherwise been the source of much distress, seems to come with the benefit of housing big lungs.)

Relieved to have made it through the first day

Day two, we’d been told, was the hardest: eight hours of trekking, including a climb of 1,200m in altitude, which was done mostly by the stone steps of the Incas. I thought they were short?! These steps were sometimes half a metre in height, and always continued for longer than you thought (or hoped). The worst part is that you don’t just go up, you go down as well – what a waste of energy! Why don’t they have zip lines to fly across the valleys to avoid this kind of inefficiency? And walking down is actually very hard on your knees. Thankfully, one of the girls in my group found me the perfect branch for a walking stick, which did wonders. I felt like Gandalf roaming Middle Earth with his staff. We reached Warmiwañusca, Dead Woman’s Pass, at 4,215m, after which we descended into the valley to eat lunch. No rest for the wicked, though, as we continued on to the egg-shaped Runkuraqay and the ‘inaccessible town’ of Sayaqmarka, after which we finally reached our resting place for the night. This second camp site gave us spectacular views of the sun setting and rising over the mountains.

Some of the never-ending Inca steps

The view from my tent

Day three started with another tough ascent but spectacular views over the mountains, including the sacred Inca peak of Salkantay. This was an ‘easy’ day, visiting the Phuyupatamarka ruins and the Intipata agricultural terraces, and arriving at the camp site at 1pm. I chose to brave the cold – ice cold – shower so as to be nice and fresh for Machu Picchu the next day. From outside the cabins, you could hear the squeals, both male and female: eeeee! oooo! wow! brrrr! (Lonely Planet says there are hot meals and massages here but not anymore! The government shut it down.) There was an afternoon visit to the Wiñay Wayna ruins but I stayed in my tent as I was coming down with a cold and wanted to be healthy for the big finish the following day. I’ve since been told that these ruins were the highlight of the trek. Ho hum. After dinner (which included a cake with the words “Mañana, llegamos a Machu Picchu” – tomorrow, we arrive at Machu Picchu – my second cake with inspirational icing on this trip), we had a ceremony to thank and tip the porters, and then it was off to bed, in preparation for the 3.30am start the next day to get to the Machu Picchu check point when they opened at 5.30am.

Phuyupatamarka and the mountains beyond

The peak in the background is Machu Picchu! Anticipation was mounting…

I actually slept quite well – the tents were great, and the sleeping bags sufficiently warm, while my down jacket made a perfectly adequate pillow; the main problem was the hardness of the ground, which bruised my hips and led to having to turn over endlessly to alternate the side that felt the pain. And I ate very well, the meals were way beyond my expectations. In the morning, we had a wake-up call with coca tea, followed by four, yes four, sit-down meals. Breakfast was bread with jam, hot drinks, plus omelette or pancakes; lunch was a two-course meal with soup as a starter and a hearty main dish (plus yummy garlic bread on the first day); happy hour was not what we would expect at home but it was pretty happy nonetheless, with trays full of popcorn and wontons drizzled with caramel; and dinner was a three-course affair with meat plus a choice of three carbohydrates for the main, followed by dessert and hot drinks. We could also buy snacks and drinks at various little stalls along the way, the cost increasing exponentially with the distance from civilisation and the time and effort needed to carry the items up the mountain. The toilets, by the way, started as toilets (1 sol and you get toilet paper and running water), became posh ceramic holes in the ground, then just holes in the ground, and finally returned to actual toilets when we reached the tourist hub of Machu Picchu.

I had been so focused on seeing Machu Picchu itself, that I had completely missed the fact that I would have three fantastic days of experiencing nature, exploring several other ruins, getting to know 13 lovely people, and pushing myself physically with the satisfying feeling of achievement that followed. I understand that some people don’t have time to do the trek, while others are physically unable to do so. But for the rest of you, I strongly encourage you to invest your time and money to experience the full wonder of this Inca pilgrimage, rather than just taking the train up to tick another box.

The practical bit:
-I went with Inca Trail Reservations – well organised, good food (with a vegetarian option), and a friendly, English-speaking guide. Another company that comes highly recommended from a friend is Explorandes.
-What to bring:
–passport (not a copy)
–camera with extra batteries if possible (there are no power outlets)
–sunglasses
–sun hat
–sun cream
–insect repellent
–anti-bacterial gel and/or wet wipes
–toilet paper
–different vest tops/t-shirts (I had one for each day)
–layers: different cardigans and jumpers to put on and take off as you move and stop, walk in the sun and walk in the shade
–hat and gloves for the cold nights (you can buy these cheaply at the many artisan stalls in Cusco)
–socks and underwear
–down pillow or jacket to use as pillow
–long trousers (the ones that zip off into shorts are silly but practical given the rapid changes in temperature)
–other trousers for when you arrive at camp/to sleep in (I had both jeans and sweatpants plus a long-sleeved top to sleep in)
–hiking shoes
–other shoes for when you arrive at camp (I had flip flops, a bit cold at night but useful for the showers on the third day)
–flash light, ideally a headlamp (useful for trips to the toilet in the dark, and for the final day when you set off before dawn)
–toiletries (toothbrush, toothpaste, floss, shampoo etc if you’re going to brave the cold showers on the third day, wet wipes to stay fresh the rest of the time)
–walking stick (I thought this was just for old and decrepit people but it’s almost indispensable, especially when you go downhill. You can bring a posh fibreglass one or buy a cheap wooden one locally)
–swimsuit and towel if you’re going to the thermal baths in Aguas Calientes
–money for tips for the porters (given as a group, recommended is a total amount that gives each porter c. 80 soles) and the two guides (personal), as well as for lunch and souvenirs on the last day in Aguas Calientes
–diary and pen to take notes
–water (I brought 2 litres that got me through the first two days, then drank boiled water that was provided. You can also buy it on the first two days, though it’s expensive. I bought a sling in Cusco to carry a bottle outside of my backpack, or you can have a camel pack if you’re fancy.)
–snacks (They’re meant to be provided, but we just got a biscuit and an apple on the second day.)
–basic first aid kit and any personal medication
The agency provides a sleeping mat, and you can rent a sleeping bag if you don’t have your own (- I also recommend a silk/cotton sleeping bag liner to stay clean and warm!).