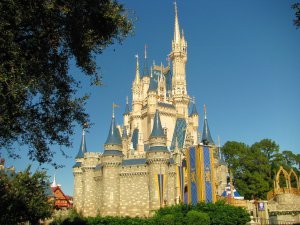 Those of you who know me will know that I have a long history of Disney princess fandom. I grew up on what for me were the classics: The Little Mermaid, Beauty and the Beast, Aladdin… Then when I was a little bit older came The Lion King, Pocahontas, and Mulan.

The release of the new live action Beauty and the Beast meant that I was given the chance to relive the excitement of my childhood, as if I were watching the old film again for the very first time. The Sound of Music-esque scene where Emma Watson’s Belle runs swirling out into the field brought me right back to how I felt aged eight (sing it with me now!):

“I want much more than this provincial life!

I can’t tell you how many times I swirled around singing this song to myself (and to any poor, unfortunate souls who were close enough that they could hear me), earnestly relating to Belle’s feeling that there was more to life than my provincial existence of school and homework, and dreaming of adventure.

And, of course, it wasn’t just Belle. Another of my favourites is Ariel’s “Part of Your World” (although in The Little Mermaid our heroine has fallen in love with a prince based on looks alone and decides she’s happy to change species and give up her voice in order to win his affection – no matter), and what about “A Whole New World” where a handsome ‘diamond in the rough’ comes along and takes me on a magic carpet ride.

So, yes, I grew up wanting adventure in the great wide somewhere, feeling misunderstood, and knowing I was meant for something bigger – but that’s not the lie, there’s nothing wrong with fantasising about all the exciting things you’re going to do. The big deception instead comes from what happens next and, ultimately, the “happy ever after”.

Belle goes off and has her adventure, she frees the castle from its spell and falls in love with the Beast, who turns out to be a handsome prince, yay! Ariel and Eric together rid the world of Ursula the Sea Witch and then get married on a lovely cruise. Aladdin frees the Genie and marries the princess, despite not being a prince. Ta-da! And they all lived happily ever after.

But what happens after the film has ended? Is Belle going to be satisfied now marrying the prince and living out the rest of her days in a castle, which, by the way, is just a stone’s throw away from her provincial little village? Will Ariel and Eric really be happy together as man and wife, given that they barely know each other? Will Aladdin the street rat be comfortable in the big palace, and will he and Jasmine be content with ruling the kingdom without the freedom to travel the world?

The finality of a magical Disney film ending – or, maybe, most film endings – gives the illusion that you are destined to do this one thing, and once you find it you’ll settle down and live out your days in perfect contentment.

And THAT is where I think they have it all wrong, and where we’ve all been sadly misled.

Generations X and Y are said to be purpose-driven, entitled and impatient. We’ve been told by our parents that we are special and we can do anything, we’ve launched ourselves out into the world to find our purpose… and then? We search for our dream jobs, travel the world to find exciting experiences and, yes, we scour the universe for our prince charming, our ideal partner. But how do we know that we’ve found it? And what happens next? There’s no theme music that starts playing as we achieve our one true purpose, no credits rolling once we’ve reached our goal.

So we end up searching, searching, for our True Purpose, our One True Calling, and the Happy Ever After. And either we never find it, and we end our lives feeling unfulfilled… or we find something amazing and fulfilling, but we’re likely to question whether or not we actually have found it, and often we’ll continue looking in that desperate search for our ONE purpose. Because it can’t possibly be our Happy Ever After since the theme music isn’t playing…

I suppose it’s natural that these princesses are all destined for greatness – a whole film has been made about them, after all. That’s part of the deception, though, that we believe that we are special and destined for some magical calling that no one else can do. The lie is not that we’re special, because we definitely are; it’s just that we ALL have the potential to do something unique and impactful, we can all create magic – even without a fairy godmother – and that magic can take many different forms, there’s not just one true calling (or one prince charming).

The latest Disney princess Moana, the South Pacific girl who yearns for the ocean, is reminiscent of all her predecessors as she dreams of greater things. She’s also specifically chosen by the ocean to save her island and her people, and so she’s special and unique versus the rest of the village, with a clear purpose to pursue. Where this film differs, though – *possible spoiler alert* – is that it ends not with her settling down and living out the rest of her life without adventure, but with a closing scene that sees her and her people rediscovering their voyaging ancestry and heading out onto the ocean to new and on-going adventures.

And that’s how I think we need to approach our lives and our goals, whether we’re talking about that dream career or the dream partner or any other big objective that we aspire to: as one of many adventures, as a project after which there will be other projects, as just one step on the journey.

Because if you think you’ll be happy and content once you find It (or Him or Her), if you think the film credits will roll once you’ve completed your life purpose… then you can only ever be disappointed and, ultimately, unfulfilled.

Home, adventure, and something in between…

Friday 13th: The day I auditioned to be a Disney Princess

GUEST POST – The Power of a Three-Letter-Word: say YES more

Pirates and princes and mice, oh my