Adventure Is Out There: My week of paddling down the Mississippi 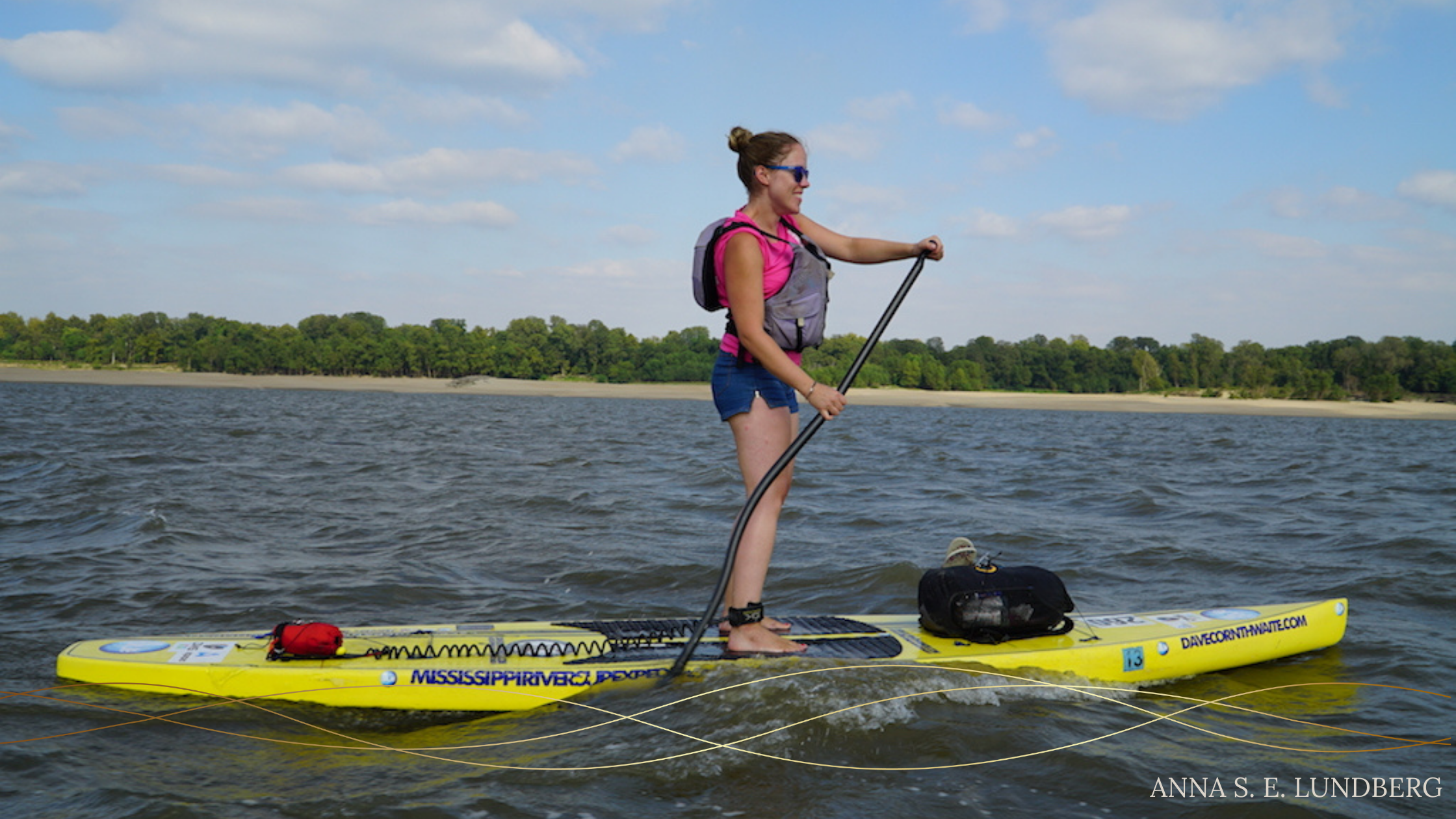 “So in two seconds away we went a-sliding down the river, and it DID seem so good to be free again and all by ourselves on the big river, and nobody to bother us. I had to skip around a bit, and jump up and crack my heels a few times – I couldn’t help it.”

-The Adventures of Huckleberry Finn by Mark Twain

I had decided that I’d be going on this particular adventure already back in May when I’d heard about it at a conference in Berlin, and I’ve enjoyed the surprised reaction that has inevitably followed these past months when I’ve told people, “I’m going paddling on the Mississippi.” I’m not sure I really knew what to expect – I’d been paddling down the Thames earlier this summer but I did recognise that this would be something different. I imagined a much wider river (true), with alligators and bears (partly true), and maybe piranhas (definitely not true).

As I found out when I arrived in Memphis, from where we’d be starting our journey, the Mississippi River is known locally as a place of great danger. “I know some men who went out there and never came back,” we were told. As a result, we were completely alone out there on the water – except for the long industrial barges that worked their way up and down the river every day. We saw none of that danger (although the first day did see a dramatic flooding of one of our canoes, dealt with valiantly by the three girls who were in it at the time), and as a result simply enjoyed having the river to ourselves all week.

We were in good hands with Quapaw Canoe Company and their founder, the legend that is John “Driftwood” Ruskey. You may have seen him in Episode Three of Stephen Fry in America (where you can spot the coffee pot with a blue handle that we used! A slightly tenuous claim to fame, but it got me excited…). Our transportation for the week came in the form of two beautiful canoes, Grasshopper and Kingfisher, and two stand-up paddleboards (one of which Dave Cornthwaite used when he paddled the length of the river in 2011 and the other used by his support team when he swam the Missouri River in 2012).

As I’ve discovered on each of my adventures these past few years, the people who go on this type of trip are by definition the most warm and open people you will ever meet. No exceptions. You feel like you’ve known each other for years even though you’ve only just met, greeting each other with a big hug and sharing your life stories within minutes. This time we did so literally, as we each took it in turns to tell our own personal stories and why we were there.

In fact, this trip was not “just” an adventure and we had a full programme of workshops and discussions organised by the leaders of the expedition, Dave Cornthwaite, professional adventurer and “yes man”, and Emily Penn, oceans advocate and big thinker extraordinaire. We were also joined by several legendary figures of the Mississippi River, including Dale Sanders – at 80 years of age, he’s just completed a solo Source to Sea paddle in 80 days to raise awareness and money for diabetes on behalf of his niece Anna; Rod Wellington – currently working his way through the Magnificent Seven, a source-to-sea descent of the longest river system of each continent over the next decade or so; and John Ruskey – our leader and the ultimate man of the river.

Our discussions revolved first and foremost around our own life and career choices in the individual sense, and we each came away with a “yes list” of actions to which we were publicly committing. In my case, I’m going to be doing – and filming – monthly challenges going forward, as well as re-launching my website by the end of the year. Watch this space… Beyond our personal choices, though, we zoomed out to take a bigger perspective as we attempted to address some broader questions about society and our planet as a whole.

We were now on “river time”: hours and minutes didn’t matter, we awoke naturally with the sun (well, some of us did) and we went to bed when we were tired. Our phones were off – except for the occasional selfie – and I had no idea what the “actual” time was; nor did I care.

Away from the city lights, with no one else out paddling on the river and with entire sandbanks to ourselves when we stopped off during the day and at night, we felt like we were alone in the world. In the afternoon, we would tie up our canoes and paddleboards, set up our tents and collect firewood for the night. I haven’t done a full week of camping since I did Duke of Edinburgh at school and that was always in crowded campsites; this was something else.

With the river unusually low at this time of year, we were able to camp on wide-open sandbanks. We walked barefoot in the sand and made coffee on the open fire for breakfast. We even toasted marshmallows on the last couple of nights. (“We usually only do that for the children,” they said.)

Life on the water

There’s something incredibly peaceful about being on, or by, the water. It’s the fresh air, of course, and being that much closer to nature and that much further away from civilisation; but it’s also the effortless way in which a boat will glide across the surface of the water, the sound of the splashing against the boat and against our paddles, the difference in perspective that you get on the world when you view it from the water. We even did some racing that reminded me of my rowing days at university; feeling the resistance of the water as you pull the blade towards you, the boat propelling forwards as you all row in sync (which did happen once or twice!).

It’s not all peace and tranquillity, though. As a lot of people have found out this summer, it’s impossible for me to paddle on the river, any river, without launching into Pocahontas’ Just Around the River Bend at any given moment.

What I love most about rivers is:
You can’t step in the same river twice,
The water’s always changing, always flowing…

Other appropriate songs that we launched into at various moments include, of course, Proud Mary, American Pie and Ol’ Man River and, as John proved, any song you choose as long as you replace a few of the lyrics… (“Oh lord, won’t you buy me a dug-out canoe…”)

As any woman who wears make-up will attest, the best thing about NOT wearing make-up is that you don’t have to take it off in the evening. Pure bliss! More than that, it’s incredibly freeing to not look in a mirror for a whole week and not worry about looking your best and covering up imperfections. (In fact, when I put on make-up again for the first time when we got back, I actually thought I had looked better without! And as I write this at Starbucks I’m mascara free…)

It wasn’t just a week of no make-up. There were also no showers, no toilets… We would go swimming in the river, of course, and I had brought biodegradable soap and shampoo to use every couple of days. You have to wonder how clean you really get, though, when bathing in that muddy Mississippi water!

By the end of the week, we had sand EVERYWHERE. You get fabulous exfoliation of your skin, darling, when you have sand in your moisturiser and in your sunscreen. Some extra crunch in your water? Yum. And a softening mudpack for your feet every time you got in and out of the boats. (Three of us took this to the extreme one day as we covered ourselves in mud from head to toe. All for the sake of art, of course.)

Experiences like these tend to blur into one big memory for me, but there are a few moments that stand out. There was the otherworldly Cherokee “smudging” ritual as Chris played the drum “to the beat of the river”. The evening that Zoë sang an a cappella rendition of Down to the River to Pray as we sat around the fire. The five shooting stars that I saw one clear night, the night that we slept without the fly so that we could look up at the universe as we went to bed and watch the sunrise in the morning when we awoke. And the final night when we each shared the things that made the others so brilliant and unique. Just perfect.

Then there were the various times that Mississippi Madness set in, including when we built a water slide on the banks of the river (success!), when Alexis and later Dave C appeared dressed as Batman, and when Dave A spent the night thwacking the water with his paddle in an attempt to wake up the fish. Surreal. But nice. (Name that film!)

In fact, a week or so later I wonder if it ever happened. Were we really out there on the river? Camping on the sandbanks? Toasting marshmallows on an open fire?

Luckily I have photographic evidence to reassure me that it was real. I’ve also been left with a new confidence and determination to get things done after the discussions we had together, some of which I’ve already made progress on. And I’ve been left, I hope, with a new set of enduring bonds. Here’s to the next adventure, my friends!

Exploring Mindset: This Mississippi adventure was the first of its kind on the river, but Dave and Emily have been running workshops for a while on a 72ft yacht called Sea Dragon. Although they never do the same trip twice, they’ve promised to repeat this one next year – after all, the river is always changing (always flowing!). Find out more on the Exploring Mindset website and check out some more photos from our trip on the Facebook page.

Quapaw Canoe Company: This is John Ruskey’s company, highly recommended if you’re ever in Clarksdale, Tennessee!

Allen’s Kayaking Adventures: We were also joined during the week by Allen, who runs his kayaking company out of Memphis.

Zoë Sundra: Find out more about the talented Zoë, she of the soulful rendition of Down to the River to Pray, on her website.