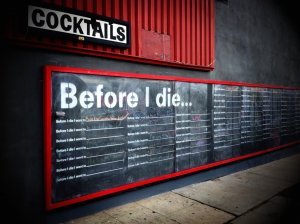 So I’ve realised that I’ve watched 18 films so far on this trip, most of them forced upon me during long-haul bus rides, a couple in a hostel, and three that I actually chose to watch at the cinema. One of the good ones was The Bucket List, in which a selfish capitalist Jack Nicholson finds himself sharing a hospital room with loveable family man Morgan Freeman. Both suffering from terminal cancer, they are each given a matter of months to live; so they decide to go off together and experience the world. Their bucket list (a list of things to do before you ‘kick the bucket’, as I’ve just discovered – duh) includes a mix of each of their ideas, from the more material skydiving, getting a tattoo, kissing the most beautiful woman in the world on the one hand, to the more poetic, like witnessing something majestic, on the other.

100 Things to Do Before You Die: How to write your own bucket list

100 Things to do before you Die: My bucket list one year on

Revisiting The Bucket List: Why are we all so concerned about death?

Travel Maps and Travel Lists: Why this urge to visit more countries?