You may remember my blog posts from last year about an epic road trip that I took with my aunt from Los Angeles up to San Francisco and Napa, across to Yosemite and Death Valley and down through the Grand Canyon. Well, once in a lifetime that may have been but we decided to do a second one this year. My cousin was getting married in Estes Park at the entrance to the Rocky Mountains, just outside of Denver, and so this was our anchor for planning the route.

Now I can’t mention Estes Park without saying something about the Stanley Hotel. Opened in 1909, in 1971 it hosted Stephen King and his wife in Room 217. They were the only guests and his experience of the echoing halls inspired him to write The Shining. Though the hotel didn’t serve as the location for Kubrick’s iconic film, that film plays on continuous loop on all the guest room televisions. If you’re interested in seeing evidence of paranormal activity on site, you can join a ghost tour where you’ll be astounded by lollipops being knocked over by the various spirits who inhabit the building.

For the first time, I put together a little video of our trip – I almost get tears in my eyes each time I watch it as I remember everything we’ve seen in such a short space of time (reflected in the fact that I’m squeezing it all into one blog post!). Country roads, take me home!

Our trip started in Wyoming, driving north from Denver up through Cheyenne, the capital city. Although my post-trip online research has told me that Wyoming no longer officially has this slogan, the state motto ‘like no place on earth’ quite accurately summed up this part of the country. The area includes both Yellowstone and Grand Teton National Park but that’s not all its known for; Wyoming is also ‘the equality state’, having been the first to grant women the vote in 1869.

Another state that’s “like no place on earth” is Montana. For some reason I had imagined wide-open prairies and Native Americans, presumably thanks to films like Legends of the Fall and A River Runs Through It – and this is actually quite close to the reality, Montana being the fourth biggest state but ranking just 44th in population of the 50 states. What I did not expect, however, was the proliferation of crystal meth, of which I was informed by a lot of billboards with various messages along the lines of “one shot and you’re hooked”. Lovely. Seeing how differently people out here live, together with the conversations I overheard throughout the trip about guns in particular, I got an unexpected insight into the voting patterns of the country.

Now the reason for venturing into meth central was in fact this: ticking off #7 on my bucket list and visiting Mount Rushmore (“THERE IS NO COUNT RUSHMORE!”). It’s really not on the way to anything and as we’ve established the US is a very big country, so you can’t exactly just pop up to Mount Rushmore. Having come to Colorado for my cousin’s wedding, however, it felt like this was my big chance: the memorial is less than a six-hour drive from Denver. It was conceived precisely to bring tourists to the Black Hills region and it seems to have been successful!

Now, as is often the case, Mount Rushmore was smaller than I had expected (did you ever visit the Leaning Tower of Pisa?), at least from a distance. On the way there, I first saw the profile of a face carved into the mountain but it turned out in fact to be that of Crazy Horse. In an ambitious project that started in 1948, the intent has been to create a monument to represent a Native American hero; if it’s ever completed it will be the largest sculpture in the world. Over at the better funded Mount Rushmore, the four faces of the American presidents were chosen by sculptor Gutzon Borglum to represent the founding (George Washington, 1789-1797), growth (Thomas Jefferson, 1801-1809), preservation (Abraham Lincoln, 1861-1865) and development (Theodore Roosevelt, 1901-1909) of the United States.

And the name, Mount Rushmore? Read this letter. Random…

The unexpected highlight for me was coming back in the evening, when all the visitors joined in with the national anthem as the monument was lit, and all past and present military personnel were individually honoured on stage. If you’d like a taster of what this was like, I recorded a video on my phone – it’s very dark, but you get at least an idea of the atmosphere. Just click on the ‘X’ to remove the ad at the bottom.

Reading about Crazy Horse led us to the Battle of the Little Bighorn, where the combined forces of the Lakota, Northern Cheyenne and Arapaho won a victory against Lieutenant Colonel Custer and the 7th Cavalry Regiment of the United States Army (referred to in The Last Samurai, if you’ve seen that recently!). Although we hadn’t planned a stop there, I was happy to see that the site of ‘Custer’s Last Stand’ was on the way to our next stop, West Yellowstone.

Although that battle of 25th-26th June 1876 was a victory for the Native Americans, just a few years later they had surrendered. The site of the battlefield today includes a National Monument with the Custer National Cemetery as well as an Indian Memorial.

I’ve always loved Yosemite National Park but I have to say that I may well have a new favourite: Yellowstone. Its sheer scale and spectacular beauty was quite overwhelming, with every turn in the road offering a fresh perspective and a new type of landscape. The first national park in the US and possibly also the world, it encompasses sub-alpine forest, geothermal features including geysers (also ‘paint pots’ and ‘fumaroles’), mountains, lakes, rivers, canyons, waterfalls… and a range of wildlife including bears (we saw a black baby one), bison and elk (we saw several), deer (we saw many!). We saw most of it from our car so I’d definitely love to come back and have more of a natural experience of camping… but WOW, what we saw just took our breath away. We even timed our visit perfectly to the Old Faithful geyser just as it erupted (it does so approximately every 90 minutes – you can follow the latest estimates on its personal Twitter account!). 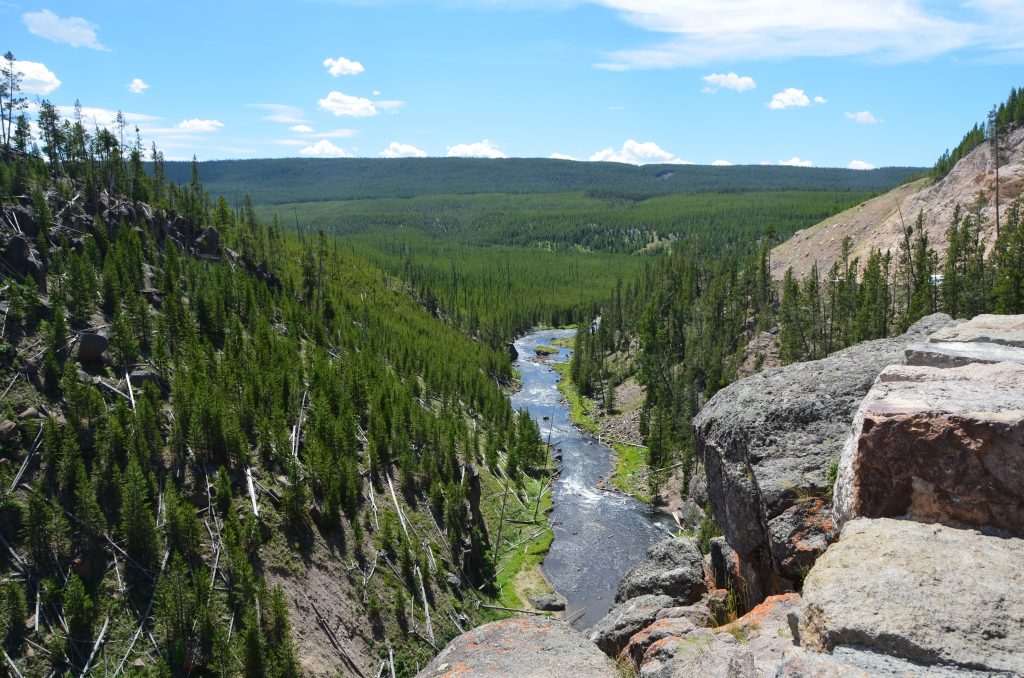 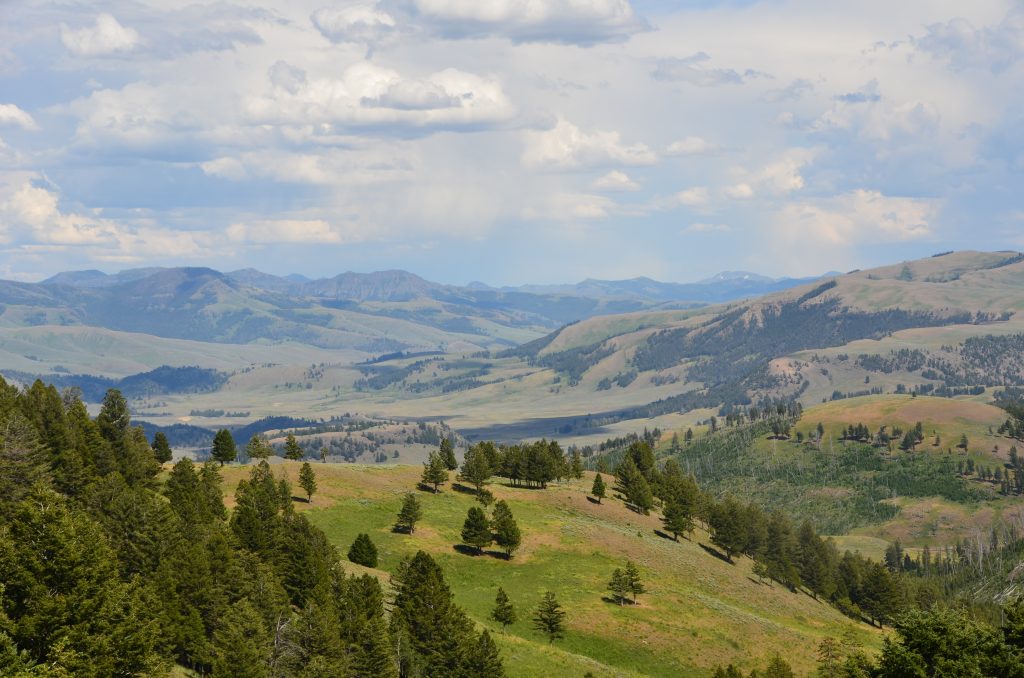 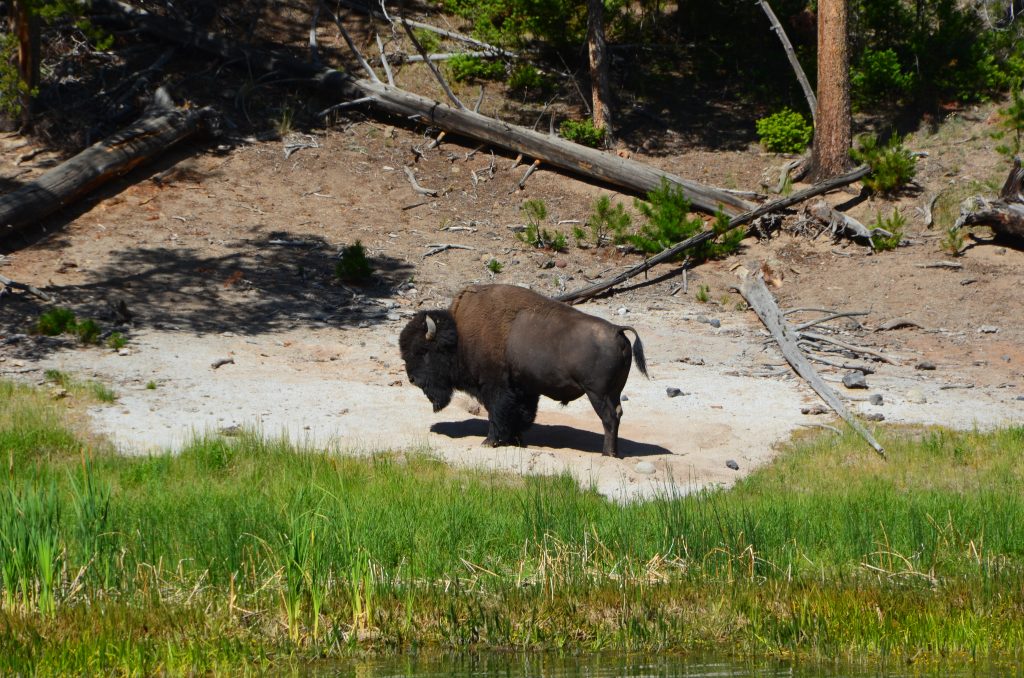 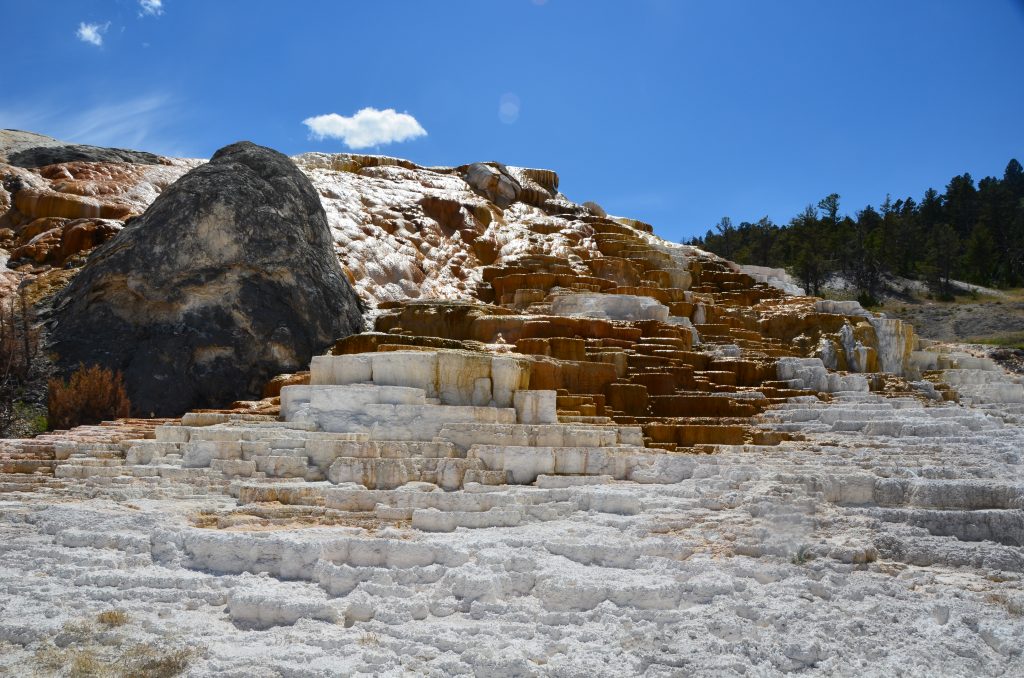 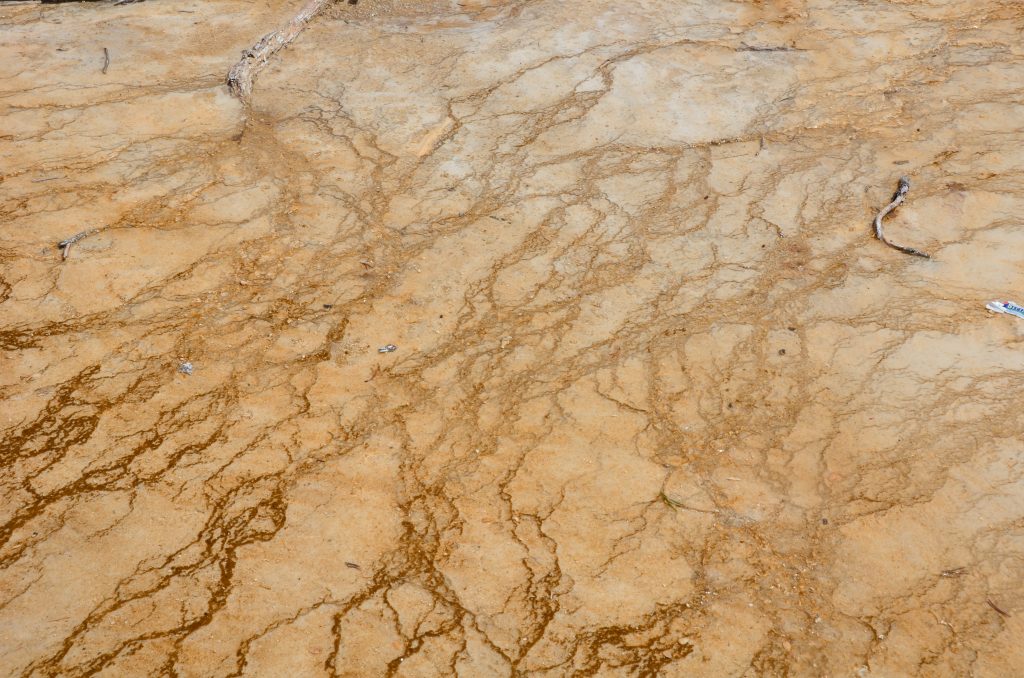 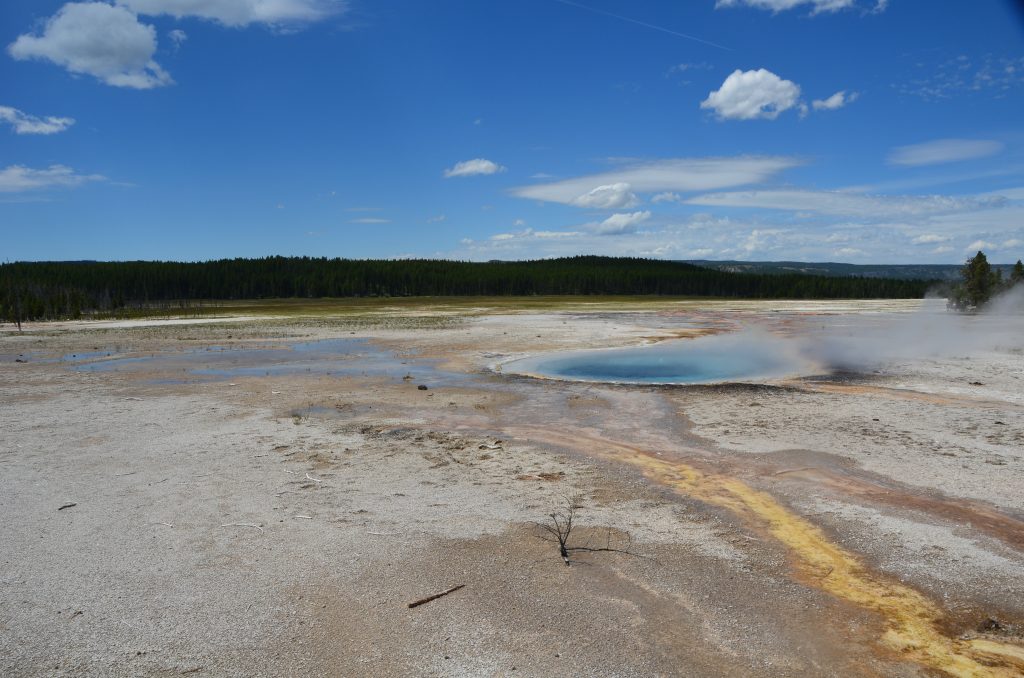 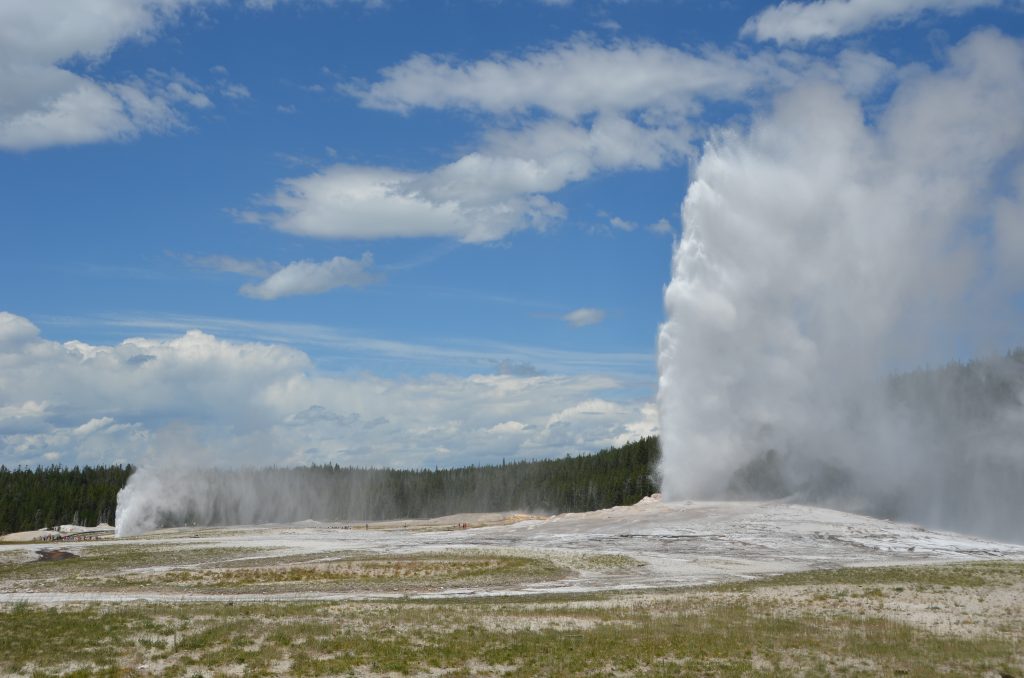 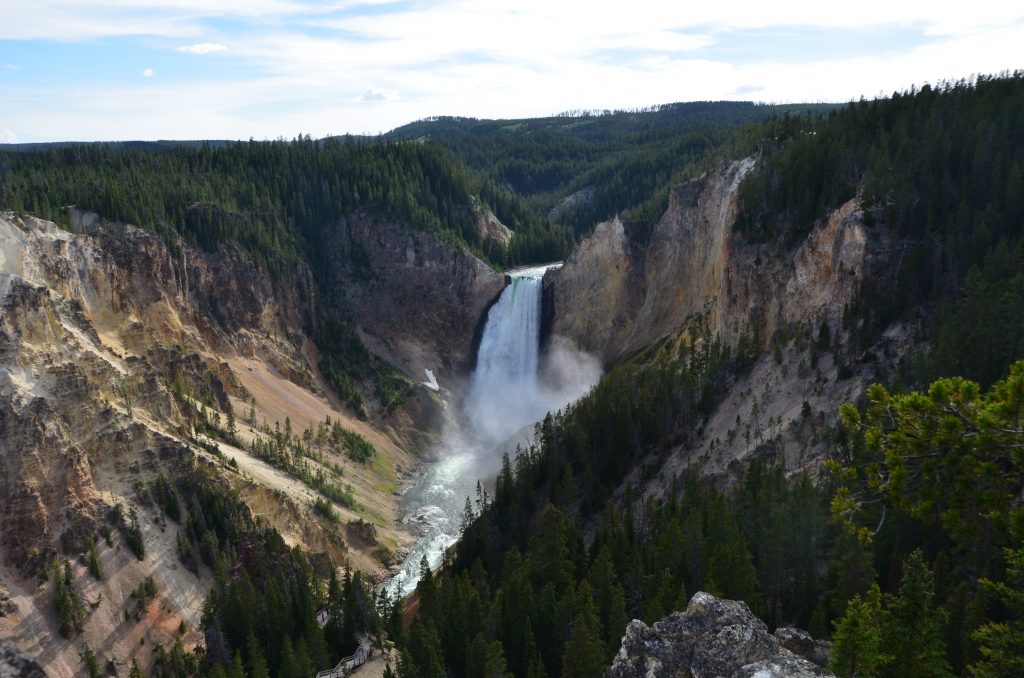 Salt Lake City: another place that I’d been curious about but I would never travel to for its own sake. Of course I’ve always known it as the headquarters of the Mormons, something that has only been reinforced since watching Book of Mormon. Twice. As far as I can tell, everything portrayed in the musical is basically true (okay, except the actual story of Kevin, Arnold, and Uganda) and it was quite fascinating to learn more about their beliefs of Jesus coming to North America, Mormon and his son Moroni (“the all-American angel”) writing down their witness in the 4th century AD, Joseph Smith finding those golden plates, and Brigham Young founding the religion in Salt Lake City.

Sal Tlay Ka Siti, not just a story mama told
But a village in Ooh-tah, where the roofs are thatched with gold
If I could let myself believe, I know just where I’d be –
Right on the next bus to paradise: Sal Tlay Ka Siti

Now Salt Lake City is the location of the Mormon temple, and it does look exactly like it does in the musical set. I found it interesting, though, that only about half of the city’s population is Mormon and there is actually a strong counter-culture that means that it’s no problem at all to find places to drink coffee or alcohol… or do yoga! Since it was only a quick two-night stop, we did still focus our attention on Temple Square, which was the reason why I wanted to visit the city. We said, “Hello” to a lot of very friendly Mormon volunteers who were there to guide people around the area, all for free. Most in fact were women, both young students who were on their mission and older pensioners (rather hilariously, it was the latter who were tasked with showing us how the computers worked in the Family History Library).

I honestly wouldn’t recommend such a whirlwind tour of so many states, even though that’s often what I end up doing; but it did gave me a taster and I now know where I’d like to come back to (definitely Yellowstone for some proper camping as well as Jackson and, more surprisingly, Salt Lake City).

A few of my favourite places to stay or eat:

Torrington, Wyoming: This was a ‘middle-of-a-nowhere’ petrol / lunch stop but I feel it deserves a mention because of the surprisingly modern coffee shop The Java Jar, where they served great coffee and very fresh salads and sandwiches. They even had Wi-Fi!

Broadus, Montana: Should you ever find yourself driving through Broadus, then keep on driving. Should you for some reason have to stop, then make your way to the bowling alley (you’ll know it by the naked baby doll tied to a post outside) where you can get a really yummy quesadilla.

Keystone, North Dakota: Our hotel recommended the Powder House Lodge Restaurant and we weren’t disappointed. I had the most delicious elk medallions sautéed with apples and my aunt had the one of the best (buffalo) filets she’d ever tasted. I also had a very tasty Moscow Mule in the Red Garter Saloon where there was live music and even a bit of dancing.

Jackson, Wyoming: Try Bin 22 for dinner and drinks (the restaurant is next door to the grocer’s where you can pick up a bottle of wine with no corkage), and The Bunnery, a popular breakfast spot for tourists and locals alike.

Salt Lake City, Utah: The Melting Point was a pretty amusing insight into what Americans think of fondue. Bearing little resemblance to what we do in Switzerland, this was a massive four-course extravaganza that nonetheless was worth it for the experience!