I’ve always been fascinated by the universe and everything in it. I’ve already said how I wanted to be an astronaut when I was little. We recently found a copy of a letter my mum had written to some astronomers’ organisation cancelling my subscription to their magazine, saying that, “although my daughter is very interested in astronomy, your publication is a bit too advanced for an eight year old”. I read A Brief History of Time and watched all the documentaries I could find with Stephen Hawking. I successfully convinced my IB Physics teacher to cover astrophysics as one of the optional subjects (this turned out to be a mistake as I knew more on the subject than she did). I even came close to studying astrophysics at university, but then took a gap year and ended up applying for something totally different. These days, I eagerly consume any programme featuring Brian Cox. And now, travelling in South America, I’ve discovered an amazing field that I never even knew existed: archaeoastronomy. It combines my love of the universe with other interests like history, anthropology, mythology, and physics.

At the planetarium in Cusco, Peru (a city which itself is designed to mirror, and point to, specific points in the night sky), they told us about the Incan cosmology and how the river in the sky, our Milky Way, had its earthly counterpart in the Río Urubamba. The Sun, the Moon, and the planet Venus featured prominently in the Incas’ beliefs, and they identified a number of constellations, including the lamas, the shepherd, the fox and the frog, that can be seen in the dark matter of the Milky Way. They constructed temples and observatories to align with the rays of the sun during the winter solstice or to maintain a calendar, mostly for agricultural purposes. They used the brightness of the Southern Pleiades to predict the weather and so to plan the harvest (since then corroborated by modern science). And on the steps of Choquequirao, a line of white stone lamas lead the way to the lama in the sky.

Since 1922, we have 88 official, globally recognised, constellations. (Is it just me, or does this number seem very small considering the vastness of the sky? And, I’m sorry to tell you this, but the Big Dipper, the one constellation we can all identify, is not actually a constellation. What?! In fact it’s an asterism, a pattern of stars within a bigger constellation, in this case, Ursa Major.) Of course, they are only constellations from where we are seeing them, in 2D – they don’t actually exist in 3D reality. I’ve had plenty of opportunities to gaze up at the night sky here in South America, in places far from the light pollution that otherwise prevents us from seeing what’s out there – on the boat in the Galapagos, up at Machu Picchu, out on the Bolivian salt flats. Some constellations can be seen, at certain times of the year, in both the northern and the southern hemisphere, while others are unique to one or the other. The most famous constellation in the south, and the smallest of all of them, is the Southern Cross. From this easily recognisable point, I’ve started to learn to identify the patterns that are nearby: the Centaur and the Southern Triangle, as well as some of the Zodiac signs on the ellipsis, the fabulous Scorpio and the not-so-fabulous Libra (it’s my sign, but it’s just four stars in a kind of square shape. Boring!) – still a long way to go to learning all 88! The planets move along this ellipsis, and I’ve been able to see both Venus and Saturn these past months.

At the Cusco Planetarium and at the Observatorio Mamalluca in Vicuña, Chile, I got to look through the different telescopes to see things invisible to the naked eye: clusters of stars, including the Jewel Box cluster of coloured gems, located in the Southern Cross constellation and officially named NGC 4755; the binary stars of Alpha Centauri (that look like one star without the aid of a telescope); and the rings of Saturn. Chile is a particularly favourable location for astronomers due to the climate and the clear skies (in some parts of the desert, rainfall has NEVER been recorded. Ah, just you wait for Anna to come and visit), and as such is home to many international telescopes. The European Extremely Large Telescope is currently being built outside of Antofogasta, dwarfing the existing Very Large Telescope. Chilean astronomers (and foreigners who have worked for a year in Chile) are fortunate enough to be allowed free access to these telescopes for a month each year, avoiding the otherwise huge cost of using one of these massiv telescopes to stare at a tiny piece of the sky and most likely find nothing of interest.

But perhaps astronomy and astrophysics would not have suited me after all. Really what I want to do is lie in a field and gaze up at the stars, not sit at a desk making measurements and calculations. Looking up at the blackness above – at the billions of stars, each as important as our own sun, whose light has travelled billions of light years to reach us; at the countless worlds that must, with mathematical certainty, exist out there; at the white mass of the Milky Way, which is just one of countless galaxies in the Universe – all of our petty little human concerns pale into insignificance. (Doctor Who, I’m sure, would disagree.) And yet, the next morning, when the sun rises and a blue sky encapsulates our little world – rather like the television studio bubble of The Truman Show – we forget all about that whole Universe that is out there and get on with our daily lives. I guess we have little choice – I’m not sure society would look kindly on me if I suddenly stopped living a normal life and instead wandered the streets pondering the meaning of life. This ain’t Ancient Greece, ya know. But a bit of perspective, a bit of humility, maybe wouldn’t go amiss.

I don’t think I experienced the full potential of La Serena. I didn’t go to the beach, and I didn’t do any tours. (I did have lunch at the beach, with a nice glass of red wine.) Instead, I ate Chinese, I ate sushi, and I went to the cinema (to see Now You See Me: super slick, really entertaining, go and see it!). The weather wasn’t great, and I was happy to have a bit of a break from manic tourism. I did, of course, go to my standard one museum per city, another Museo Arqueológico, with the usual mummies, ceramics, etc; and, most rewarding since I wasn’t planning a stopover on Easter Island on my trip, they had one of the Moai on display. 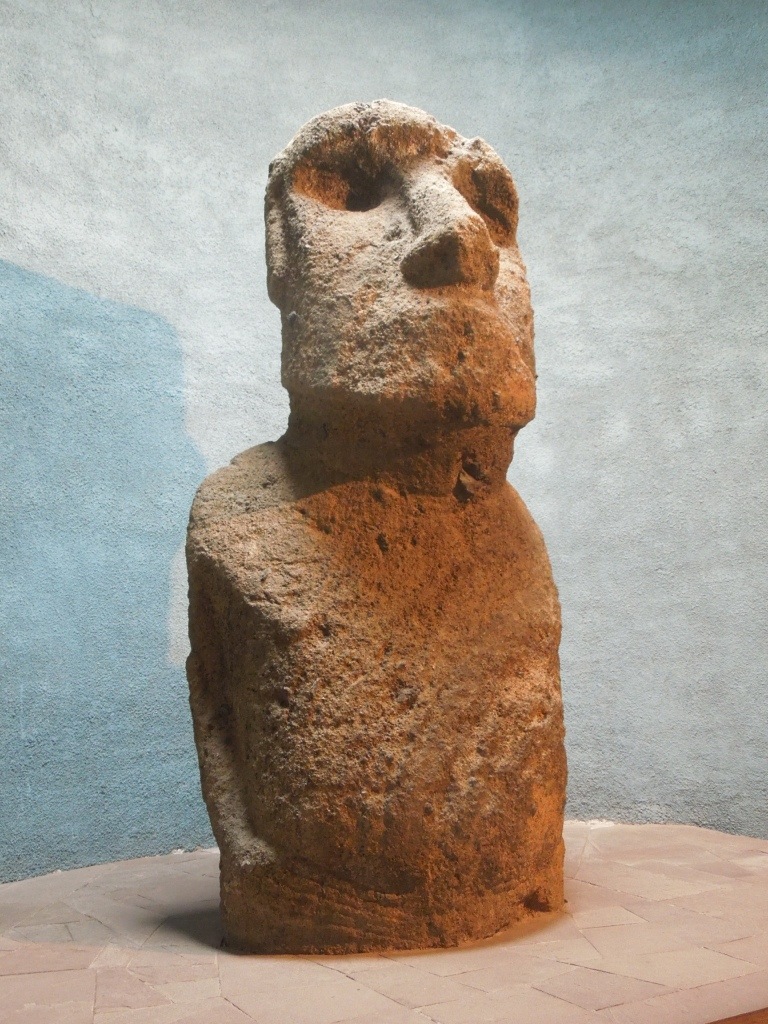 The only one of the Moai to have done a tour of Europe, apparently 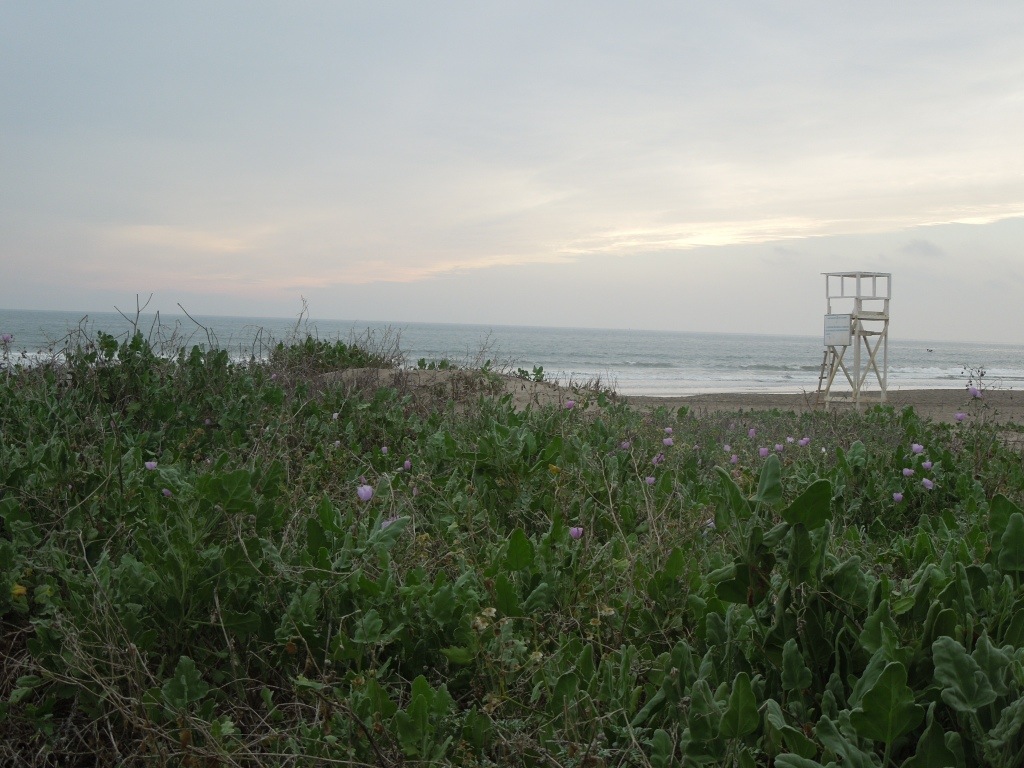 Not a lifeguard to be seen 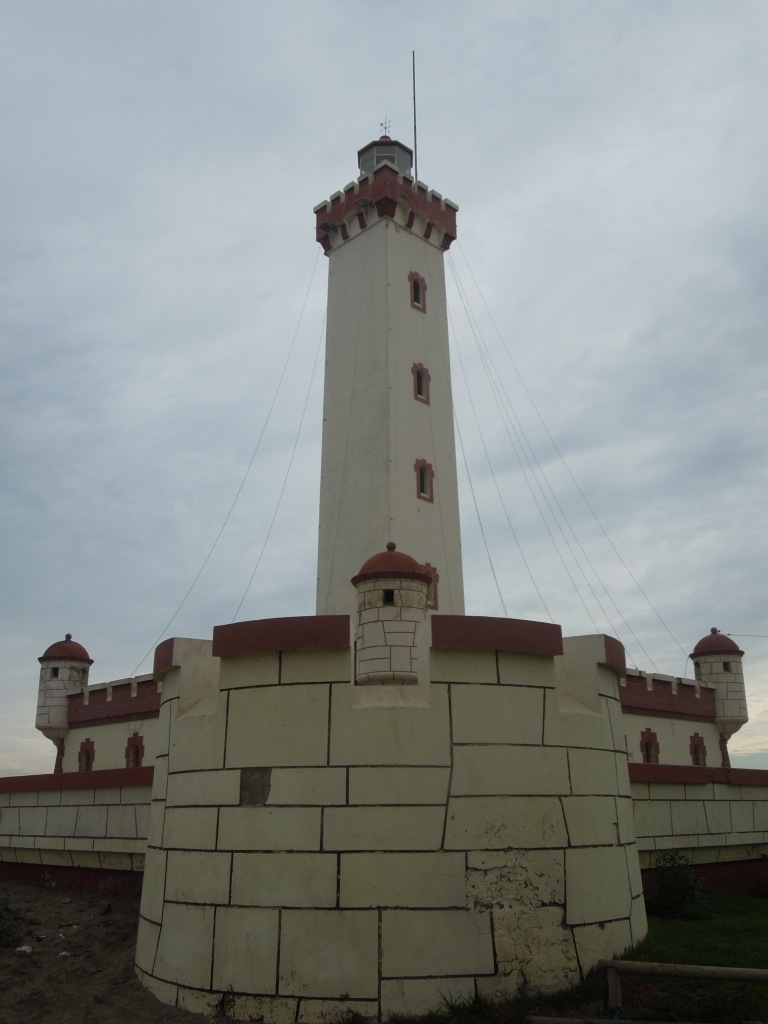 Next, I headed to Vicuña, a town in the Elqui Valley outside of La Serena. My main reason for going was to visit one of the astronomical observatories, which isn’t possible during the full moon. Now it wasn’t a full moon when I arrived in Vicuña. It was a SUPERMOON. This unusually large moon (14% larger, and 30% brighter) appears when the full moon coincides with the moon’s closest approach to the Earth, which happens every 14 full moons, i.e. less than once per year. So a well-timed visit. 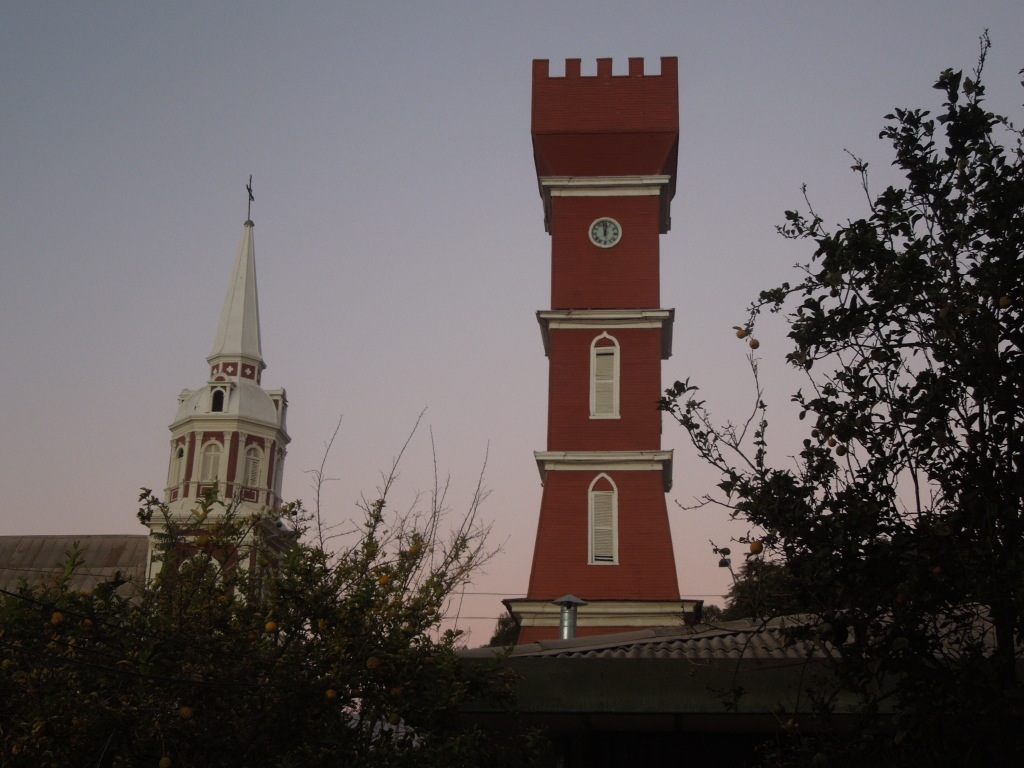 The Torre Bauer and church in the town of Vicuña

Vicuña is also known, at least locally, as the birthplace of Gabriela Mistral, a Chilean poet and feminist, and the first Latin American to win the Nobel Prize in Literature, in 1945. According to Wikipedia, she is probably most quoted in English for Su Nombre es Hoy, ‘His name is today’:
“We are guilty of many errors and many faults, but our worst crime is abandoning the children, neglecting the fountain of life. Many of the things we need can wait. The child cannot. Right now is the time his bones are being formed, his blood is being made, and his senses are being developed. To him we cannot answer ‘Tomorrow’, his name is today.”
There was a museum in her honour right by my hostel, which closes on Mondays. I was there on a Monday.

Now what I did do in Vicuña was hire a bike and cycle around the countryside. I was given a very inaccurate map, a puncture repair kit (as if I’d remember how to use it), and a pink bottle of water, and off I pedalled. Soon I was coasting down the main road singing songs from Sound of Music. But I wasn’t supposed to be on a main road, so I cycled back and tried again to understand the map. I had to ask, and backtrack, a few more times, and I’m pretty sure I went up some unnecessary inclines, but eventually I found the correct route and could enjoy the views of the surrounding landscape. In fact, every time I got over-confident on a flat or downhill stretch, I would turn the corner to find a steep uphill stretch. But pride wouldn’t let me get off and walk, so each time I huffed and I puffed my way to the top. The cycle tour ended with a visit to the Capel pisco factory, which in turn ended with a tasting of three piscos of our choice. Pisco is a grape brandy developed in Chile, or in Peru, depending on whom you talk to, by the Spanish in the 16th century. Of course, I had to try the one called La Bruja, the witch, but the one I preferred was the stronger bicentennial limited edition, matured in wooden barrels for four to five years, now no longer being produced; and probably my favourite was the Cremisse, which was essentially Baileys. Luckily, the pisco factory was really right at the end of the bike tour, and I managed to stay upright for the last few hundred metres to return the bike and equipment in one piece. 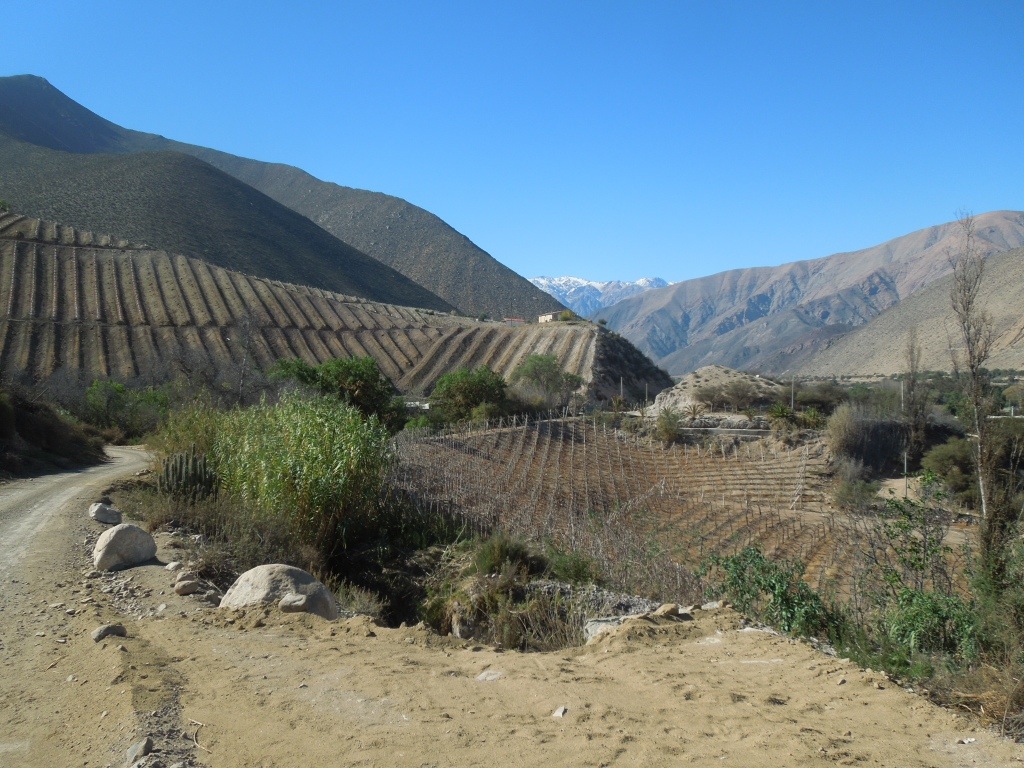 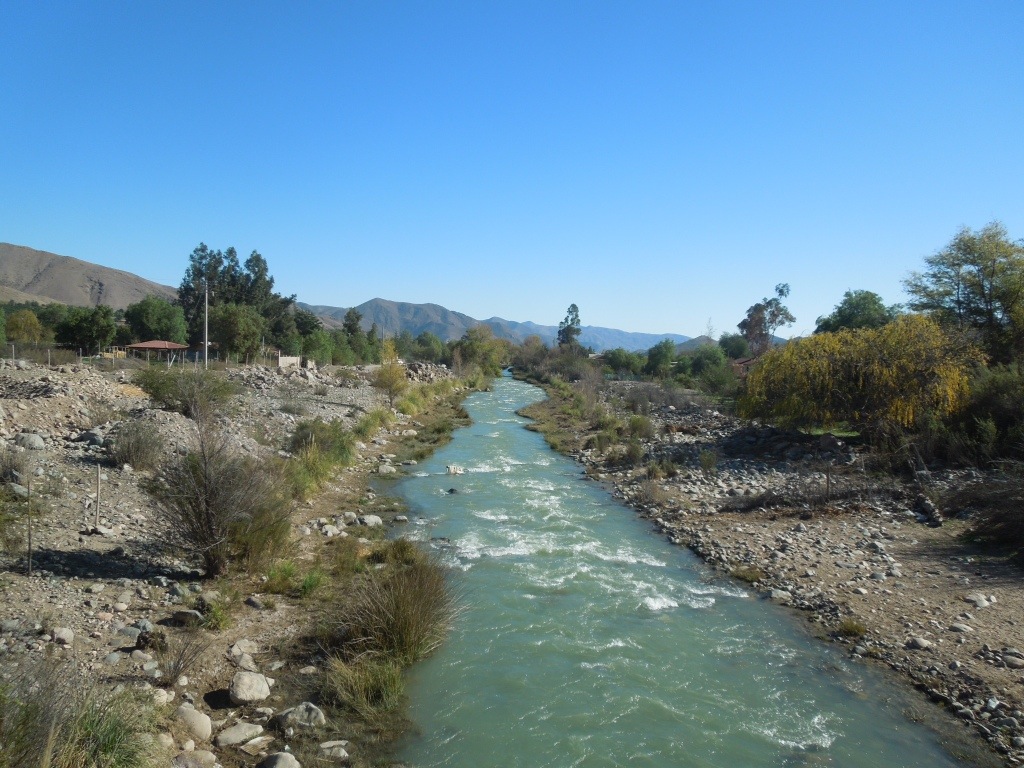 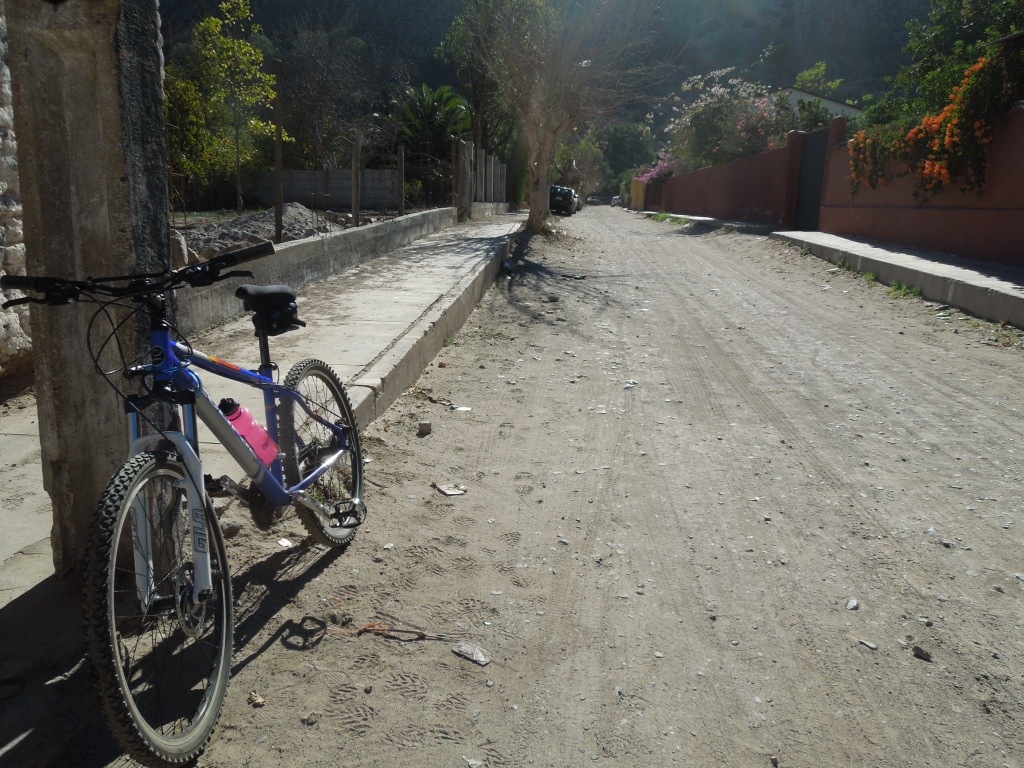 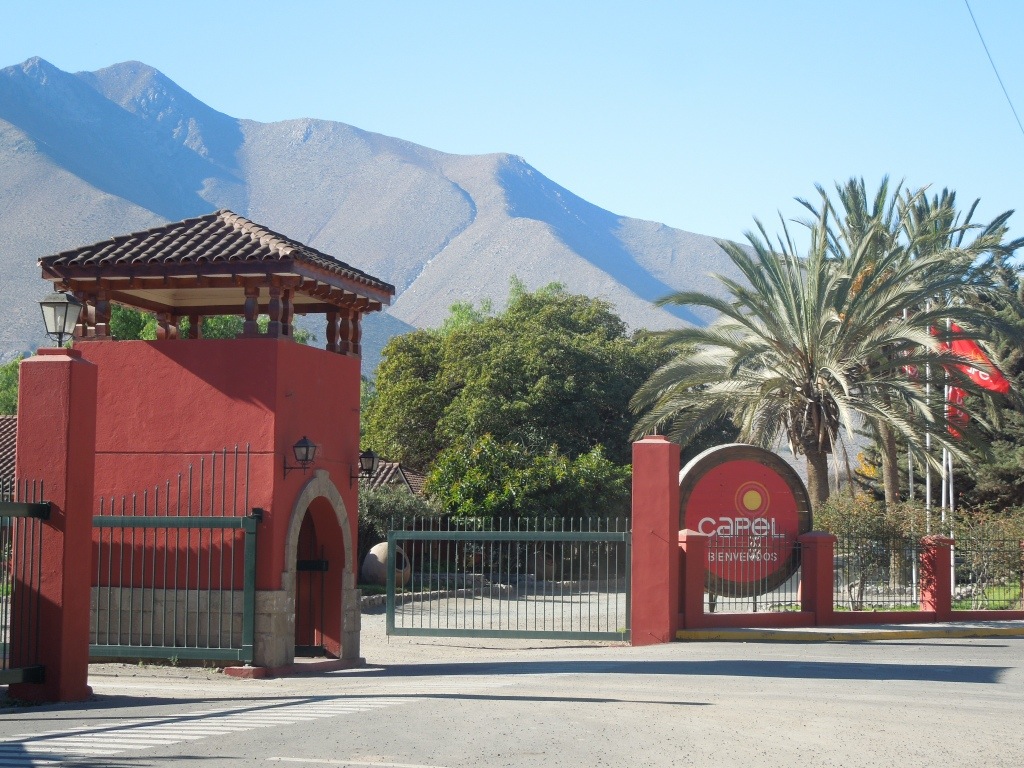 Arriving at the pisco factory 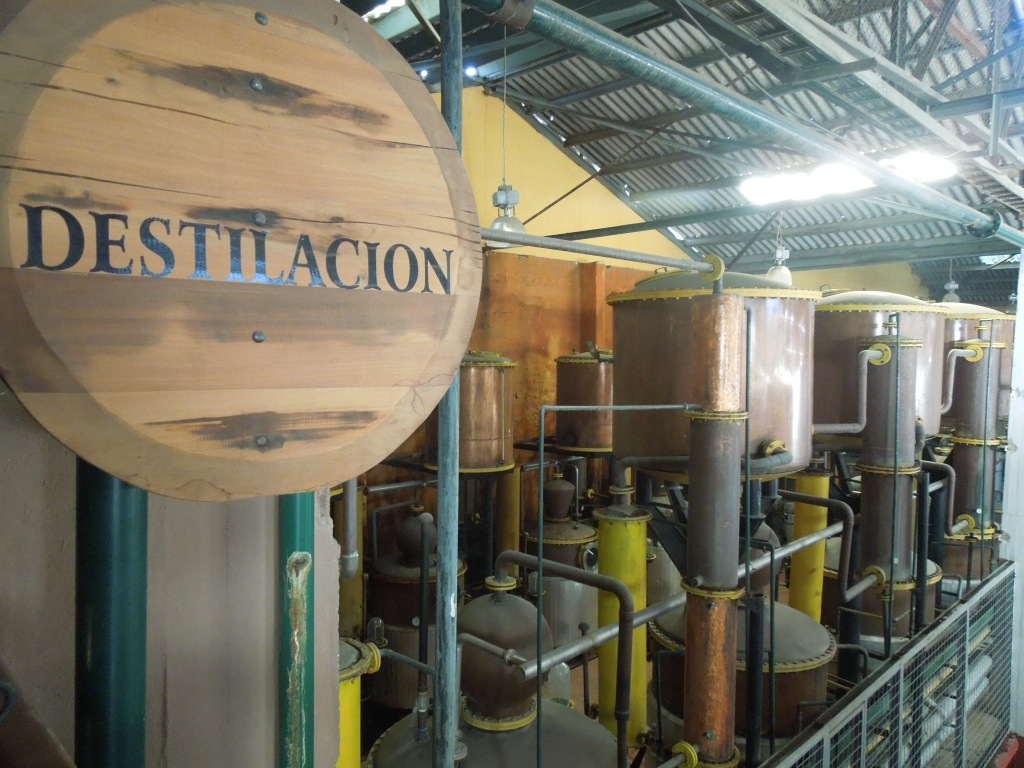 Taking a sneaky look inside 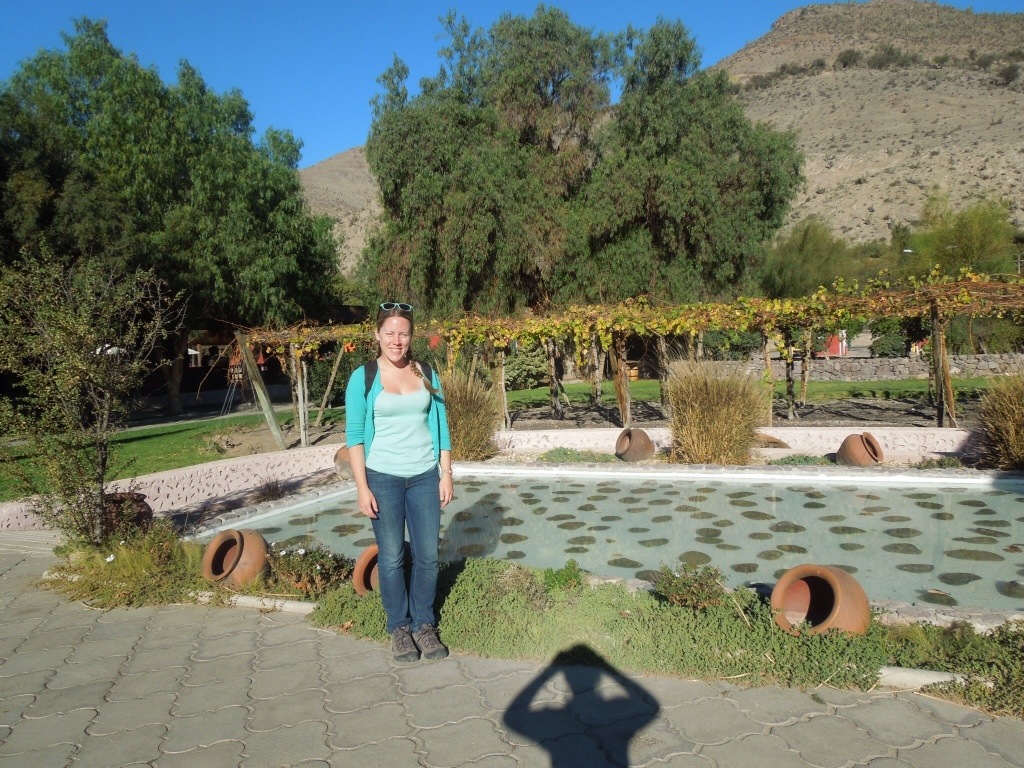