Today I have the pleasure of sharing a guest post from Terri Witherden. She said “yes” to a little adventure back in June and this has led to a whole summer of “yes”, culminating in being part of the team supporting Dave Cornthwaite in his first-ever Yestival, a weekend of campfires and inspirational speakers. And this is only the beginning…

It can open doors, start new journeys and lead you down paths you could never have planned. It can be frightening, it can be daunting, but it can be the most wonderful world in the world if you let it.

A few months ago, I became aware of just how little I said “yes”. “No” was my default response to life, falling out of my mouth like a lead balloon and sinking any chance of new adventures before they ever really had chance to float. Inspired to Say Yes More in June, my summer evolved into a season of adventures, firsts and friendships – all through three little letters.

From learning to kayak and paddleboard to a month road tripping in America, “Yes” helped me discover the world and also myself. My summer of adventures culminated in a field in Surrey last week as I witnessed its magic again at Yestival: the Say Yes More Festival.

Yestival is the brain child of adventurer and motivational speaker Dave Cornthwaite. Fuelled by his own passion for living life, Dave formed the Yes Tribe (we’re not a cult, honest), a community of people who are dedicated to DOING – turning plans into actions and lofty aspirations into guidelines. Yestival saw 150 attendees merge with the good and the great of the modern adventuring fraternity. The result was enchanting.

I was privileged to watch the magic happen from behind the scenes. Each day we rose from our tents to the rallying cry of Project Awesome: a free fitness venture run by Ultimate Hell Week’s Danny Bent together with fellow adventurer Anna McNuff. The morning Yoga class was also full, perfect for those looking for something a little less burpee orientated. 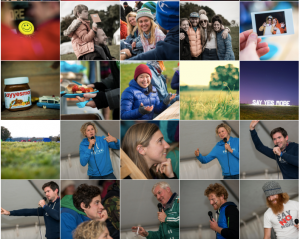 Fuelled by freshly catered food, energised by physical activities and inspired by the great outdoors, the Yestival Day began. Speakers pitched their talk topics to an eager crowd who then scurried to their chosen venue, sunk into soft hay bales and armed themselves with pencils and notepads. From the adventuring elite such as Vince Austin, Sean Conway and Niall McCann, to emerging stars like Ben Arthur, Laura Kennington and The Meek Family, there was an adventure waiting for everyone at Yestival.

From behind the scenes I witnessed the beauty of “yes” again and again. I saw ideas kindle, friendships bloom and jaws drop. Eyes sparkled around the central campfire as the British weather treated us to four seasons in a single day. Adventures both big and small were discussed and lofty “Howabouts” were nourished with oodles of genuine, integral passion. People who came alone were soon dancing with new friends as the Yes, and the hot buttered rum from the Landrover bar named Hector, continued to flow.

We awoke to the first frost of the year on the final morning of the festival. It was as if nature was mirroring the crystal-clear resolutions many of us had formed over the weekend. As the autumn sun rose, we brought the stage outside, bathing in the last warmth of summer and dreaming of the future to come.

Working on Yestival was a huge experience for me. I learned about time management, juggling jobs, social promotion and working without any budget. I also learned that when you pull the right people together, under the right banners with the right purpose, the right things happen. From hoisting six-foot letters into a giant, Hollywood-esque “Say Yes More” to chasing chickens off the festival site, I adored being apart of something so special.What meant most, however, was watching people enjoy the fruits of our efforts. Everyone came away from Yestival with a new hope to do more, be more and dream more. A support network that had been sprouting all summer through smaller campouts bloomed into an entire tree of possibilities. Rather than feeling sad as the tents came down and the stage disappeared, I couldn’t help but feel hopeful. Yestival was the start of new journeys for many involved and I can’t wait to follow the adventures that were conceived in a field in Surrey on a perfect Autumn weekend.

And just think, all of this magic, all of this opportunity, all of these new friends, dreams and adventures, all started with one little word. I’ll leave you to figure out what the word was…