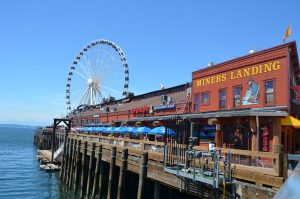 I’ve always had a soft spot for the northwest of the US. Portland, Seattle, across the border to Vancouver… it’s been a region that I’ve wanted to visit for a while. I do love the ocean, and I guess I’ve imagined a really green area with lots of seafood and kayaking… In any case, I took the opportunity recently in combination with my cousin’s wedding in Denver, Colorado, to pop over to the west coast (yes, I know, it’s like flying to Lisbon and saying you might as well pop over to Warsaw…). I started my trip with three weeks booked in an airbnb in Seattle.

When I arrive in a new city by myself, I tend to spend a lot of time with my head down at my laptop, making lots of great progress on my different work projects – and this visit was no different. I’ve got lots of new materials up on the website, I’ve been busy with new coaching clients, and I’ve even co-authored a book that’s just been launched on Amazon. I did manage to enjoy my new location, though! Here are five of the highlights…

It’s always hard to decide on where you want to stay in a city that you’ve never visited. I did some research online about the different areas – for example, the Waterfront (tourists), Pioneer Square (nightlife), Capital Hill (gay) – but eventually settled for a little studio in West Seattle. This was across the bay from the city centre, so I wasn’t exactly in the thick of things, but it was just a short water taxi ride into town. My neighbourhood was really lovely, with an eclectic collection of different architecture styles, and there was plenty to do there with Alki Beach just down the hill, the famous Salty’s restaurant, paddle boarding and kayaking, and heading out for some beautiful runs along the oceanfront.

2. Being Sleepless in Seattle

In my usual commitment to learning about a new location, I immediately set about watching Sleepless in Seattle on my first night in the city. The fashion may have changed (it was released in 1993) but the love story is timeless! There are plenty of movie locations to discover around town, and I did my best to seek them out: lunch at the Athenian Inn inside Pike Place Market, Seattle’s most popular tourist destination and the 33rd most visited tourist attraction in the world (according to my other trusted source of information, Wikipedia); dinner at Dahlia Lounge, which has unfortunately moved since it was used in the film; the airport (exciting!); and Alki Beach Park.

So I’d say that Seattle is the only place in the world where you are culturally justified in spending time at Starbucks, given that the city is in fact its birthplace. Just as Dahlia Lounge has moved since Sleepless in Seattle was filmed there, however, so too the first Starbucks café moved, the very first one being located at 2000 Western Avenue and this “Original Starbucks” now being found at Pike Place. Despite this, I definitely wasn’t the only person who had decided that it was worth visiting this ‘historic’ spot and I knew that I was in the right place when I saw the long queue outside.

Tip: If you haven’t read it, Howard Schultz’s Pour Your Heart into it: How Starbucks Built a Company One Cup at a Time is an interesting read!

The weather wasn’t great the whole time I was in Seattle (apparently it’s known for its many rainy days) so one particularly grey afternoon seemed an appropriate time to head to a museum for a bit more culture. Seattle is famous not just for Starbucks but also for Boeing (and Microsoft as it happens), and the Museum of Flight is the largest private air and space museum in the world. It’s not a huge museum, although it has buildings on either side of the road, and I was pretty excited to discover that you can book onto a tour of the NASA space shuttle trainer crew compartment. There was also a great 3D film that told the story of human flight from the Wright brothers (and dreaming of it long before that) right into a future in which we’ve colonised Mars.

Tip: If you want to grab a bite to eat then I recommend Randy’s Restaurant just down the road, a diner decorated top to bottom with aircraft memorabilia. The food isn’t great but it’s fun and it’s better than the café at the museum!

5. Eating up in the Space Needle

I had a disappointing experience in London a few years ago when I paid a lot of money to go up in the Shard, the tallest building in Western Europe, and found a pretty mediocre view from the top; and as a result I was not that fussed about going up into the Seattle Space Needle, even though it’s one of the city’s top attractions. One review on Trip Advisor even advised heading to the Sky View Observatory instead for “spectacular views – much higher, cheaper and more peaceful than Space Needle”. When my aunt was passing through town, however, I managed to book us in for brunch in the Sky City restaurant, and this was a spectacular way to end my stay in Seattle before heading on up to Canada. The circular restaurant spins around inside the tower once every 47 minutes, giving you the view of everything from Lake Union to Frasier’s city apartment and the downtown city centre.

Tip: The restaurant was fully booked when I first called, and online booking didn’t bring up all the available times – so make sure you call ahead!

5 Highlights of My Month in San Francisco

5 Highlights of My Time in Denver

5 Highlights of My Month in Honolulu