I’ve always wanted to go to Iceland. The language is reminiscent not just of the Norse of my Viking ancestors but also, I think, of elves. I probably imagined going in summer, but the opportunity arose to go with my friend Annie in January and I couldn’t say no. Of course, it would be dark – the shortest day, on the winter solstice, sees the sun rise for less than four hours – but that can be pretty special too.

Although it’s included within Europe, it feels quite far off, and even starts to approach the US – Reykjavik is three hours away from London and just under six from New York. In fact, Iceland sits on the boundary between the North Atlantic and Arctic oceans as well as between the North American and Eurasian tectonic plates. It’s a volcanic island that is also a hot spot, where high heat causes rock to melt and become magma, which erupts and results in chains of volcanoes, also seen in the Hawaiian islands. The fabulously named Eyjafjallajökull of course famously erupted in 2010, causing huge clouds of ash, which disrupted air travel in the region for a week. Iceland is part of the mid-Atlantic ridge, which is otherwise mostly under water. Since the island is relatively young in geological terms, there’s no coal or oil and so Iceland has in effect been “forced” to go green, with 25% of its electricity generated from six geothermal plants and 75% from hydroelectric dams.

Watch my little video of our Icelandic adventures to get you in the frozen mood:

Reykjavik is the world’s northernmost capital and in fact sits on the North American plate. Around two-thirds of the country’s population live in the capital region, about half of whom live in the city itself. It’s thought to be the site of the first settlement in the 9th century. There’s an all-pervasive eggy smell because of the sulphur, but I suppose you soon get used to it if you live there!

We had considered renting a car but the idea of two girls driving around in the cold and dark didn’t really appeal so we agreed to book onto a couple of tours. The most popular and classic route for tourists is the Golden Circle, which takes you from Reykjavik into central Iceland to visit the waterfalls Faxi and Gullfoss, the geysers of Haukadalur, and the national park Þingvellir (anglicised Thingvellir). All the scenes in my little video are from this tour.

Of course, another appeal of going so close to the Arctic Circle in winter is a chance to see the magical Northern Lights. I had always said that I would never recommend a tour that “just” chases the aurora, as it’s just too disappointing in the quite likely event that you don’t see them. Since it’s hard to see them in the city, though, and I wasn’t about to drive out into the darkness, we did choose to do a tour and, alas, saw very little of the lights. We did, however, drive around in the freezing cold for six hours, coming back at 1am, so that was an adventure in itself. Oh and they gave us hot chocolate and vodka as consolation.

The final “must-do” in Reykjavik is to visit the Blue Lagoon. This is a geothermal spa, “one of the 25 wonders of the world” according to the website. This was an amazing experience, very unusual and very relaxing… but I have to say that the logistics of it all were terrible. Despite having pre-booked our tickets (a must as this really is very popular), we still had to queue outside in the cold and then the tiny changing rooms were pure chaos. Luckily all that was forgotten as we relaxed into the hot water and drank our prosecco. It’s a tough life… 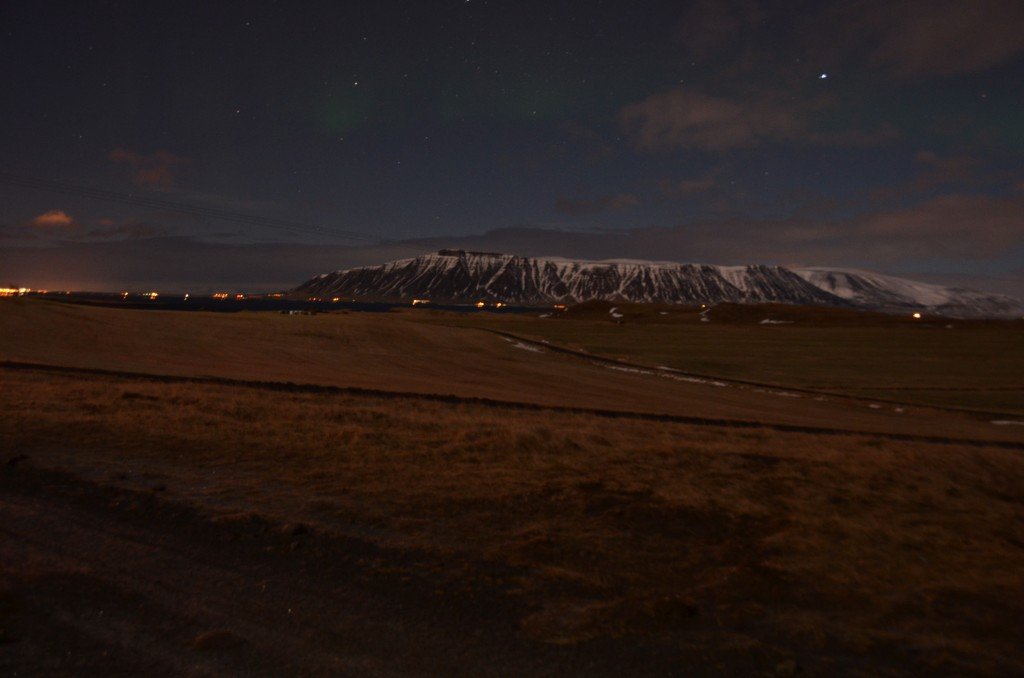 Well, look carefully at the sky above the mountain and you can see the hint of something green!

Flights: We flew with Iceland Air at £150 for a return. Although the flights were quite cheap, you still need to budget for the expensive restaurants and any tours that you’ll want to do.

Buses: Take the Flybus shuttle from the airport to the Reykjavik bus terminal, and add on the Flybus+ if you want to be taken on to your hotel from there.

Hallgrimskirkja: I definitely recommend visiting this church. Admission to the tower costs 900 ISK (100 ISK for children) and gives you a 360 view of the city and beyond.

Golden Circle Tour: We went with GeoIceland. It was a small bus group and the driver and guide was incredibly helpful and knowledgeable.

Northern Lights Tour: For the Northern lights, I had the idea that it would be better to go in a small group, to really be able to enjoy the aurora and to take my time photographing them with my tripod. We therefore chose to go with SuperJeep, sharing the car with a lovely American couple. With hindsight, since there is a big chance that you won’t see them at all, it might be better to go for a cheaper bus tour after all! In theory if you don’t see them then they will take you out again the next night – that’s why you should book the tour for one of the first days of your trip. In our case, however, the subsequent days all saw bad weather which meant that the tours were all cancelled.

Blue Lagoon: Book your tickets ahead on the Blue Lagoon site. There are a number of different ticket options available, we got “Comfort” for 55€ and this included a towel and a little sample product kit. Oh, and a drink from the in-lagoon bar! We took the Flybus shuttle from Reykjavik to the Blue Lagoon and then continued straight on to the airport (there is storage for your luggage at the spa) – you can also do it the other way, going to the Blue Lagoon on arrival and then continuing on to Reykjavik at the start of your stay.

Airbnb: We stayed in a gorgeous (and warm!) flat in the centre of Reykjavik. Use this link to book your stay here, or anywhere else in the world, and you’ll get a £14 discount.

Restaurants: I mentioned that the restaurants were expensive and we didn’t even make it to the top recommendations. The main street in Reykjavik is Laugavegur and it is full of cafés and restaurants. You can also head off onto the side streets. My favourite was Smakk Barinn, where “Icelandic tapas” was served in little jars. Another gorgeous one was Gló, a vegan-friendly restaurant serving healthy but delicious food. Of course, staying in an airbnb means that you can also cook at home.

Travelling Back in Time: Pompeii, Oplontis and Herculaneum