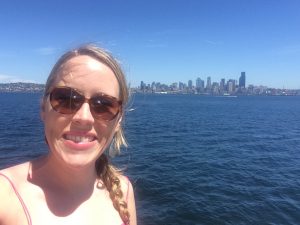 As I was packing for another trip last week I started questioning, as I always do, if this is really what I want to be doing.

This whole year so far has been back-to-back trips with just a few days in between, those days always crammed with laundry, topping up my prescription medicine (in the UK now they’ll only give you two months’ worth, even if it’s something you’ve been using for 15 years and that doesn’t change), doing various admin tasks that require being in England or having access to my ‘stuff’, and packing for everything from paddle boarding to attending a black tie wedding. All that preparation is exhausting but not only that, I’m often heading off to places I’ve never been to and where I don’t know anyone.

I always question everything I do, so this isn’t new. I’d be questioning myself just as much if I was buying a house and staying put *forever*.

It’s not just me doing the questioning, though. People are constantly asking me if I’m enjoying it, isn’t it exhausting, when or where am I going to settle down? Even my nephew asked me a while ago, “Aunty, why are you always travelling around the world?”

I think that when I started my travelling was a means of escape for me, a kind of rebellion, and a way of embodying that freedom that I realised I value so highly. It’s the thing you do when you quit your job; it’s about seeing the world, having new experiences, ticking things off your bucket list.

But travelling alone has given me so much more than that, and something that once seemed scary, something that ‘other people’ did, now feels completely natural. I’ve learned to get my bearings in a new city, finding my way around and exploring what my temporary home has to offer. I’m very happy in my own company (well, really, who wouldn’t be?!). I’m incredibly self-motivated and productive, and get a ridiculous amount of work done while I’m on the move. I’ve developed expert packing skills. And I’m completely comfortable with talking to strangers.

That last point is an important one, and one that opens up the real magic of travel when you’re on your own. When you’re travelling as a couple, or in a group, you’re likely to be mostly chatting to each other, closed both physically and mentally to meaningful encounters along the way. I used to never talk to people I met, apart from the superficial pleasantries that you’d expect.

Within the first 24 hours of my arrival in the US, I had two encounters – both with Uber drivers, in fact – that made the whole trip worth it already.

First, there was Raynier. He initially made me feel a little uncomfortable as he told me he “loved my accent” (fair enough) and that I “smelled good” (maybe less appropriate). He continued, though, with a great story about driving Swedish hockey player Peter Forsberg while he was living in California, as well as his own experiences of being a professional basketball player. He also gave me possibly the best compliment I’ve ever received, that “In the States, you’re considered the ideal woman – you’re like a goddess here.” (Yes, again super inappropriate but call me a goddess and I’m afraid my feminist edge will inevitably soften! And, really, he didn’t mean anything offensive by it, and mentioned his girlfriend several times.) Obviously we’ll see over the next few weeks if this proclamation has any truth to it; let’s hope so, given my soft spot for American men thanks to a misspent youth watching all those high school movies with teen hunks.

The second driver was William, a retired LAPD officer who had another fantastic story (in addition to also loving my accent, naturally). He and his family had been visiting the Houses of Parliament in London, where he asked for a photo with the police officers guarding the entrance. There must have been some solidarity felt between the two police corps as the officers made a phone call and gave him a note that would get him in at Downing Street. So off he and his family went, bypassing the hordes of tourists outside of the gates and posing for pictures in front of Number 10. A memorable trip for this family, and one that clearly meant a lot to William.

Oh, and tonight I’m venturing away from my computer and volunteering as event host at an Irish pub meetup for newbies to the Seattle area! (I didn’t tell them I’m only here for a few weeks, shhh!)

Every stop I make, I’ll make a new friend
Can’t stay for long, just turn around and I’m gone again.

I think this confidence I’ve developed, this openness, has in turn opened up a whole world of other possibilities and my life is all the more meaningful as a result.

I’ve said it before but it’s those little moments and interactions that make travel worth all the logistical hassle. Meeting people you’d never meet back home, hearing their stories, and, yes, being called a goddess (that simply doesn’t happen in England or Sweden – listen and learn, men of northern Europe!).

Am I searching for something? Maybe. Will I want to settle down when I find the right person, or place to do so? Probably. But in the meantime, I’ll continue enjoying, and learning from, the journey.

I’ll be in Seattle now for a few weeks so I’ve got plenty of time to settle in, drink some Starbucks and, maybe as a result of all that caffeine, finally be Sleepless in Seattle…

[Song lyrics in italics from The Littlest Hobo theme song, to which I was introduced by a friend at university. They resonated then and they definitely do so now!]

How to Keep Your Gadgets Safe while on the Road: Travel insurance for the digital nomad

Packing list for a 10-day road trip in the US: what to bring and what not to bring