I’ve been to Machu Picchu! It was amazing! But more on that another time. First, I need to continue from where I left off, with tales of human sacrifice, in Trujillo/Huanchaco in northern Peru.

From Trujillo, I took my first night bus to Lima (since then, I’ve taken two more). My hostel in Lima was one of the worst so far: an attic room, a cold drip and then no drip of a shower, and loud American teenagers. Ugh. But everything else I experienced in this city during the two days that I was there was much more glam.

I started off at the Museo Larco. To get there, I was told to “follow the blue line”. This I did, but I almost gave up after trying to follow said line, which disappeared at several points in the middle of the road, for what seemed like a very long time. Subsequently surprised by the expensive entrance fee of 30 nuevo soles, having spent the last weeks visiting local museums that cost no more than a few soles, in the end I was very glad I had made the effort, and spent several hours exploring the rich exhibits in detail. The museum covers all of Peruvian history, from stone spearheads and cotton nets from 2000-1250BC right through to the Spanish invasion in the 16th century. The museum was founded by Rafael Larco, at the age of 25, in 1926. The Incas are the most well known in modern times, since they were ruling when the Spanish arrived in 1532, but Peru’s cultural development stretches back more than 10,000 years. Arguably the highlight of the museum, though, is the Sala Erótica at the end, where you can find unusual ceramic art such as “masturbated dead man” and “woman with pronounced vulva”. I revived myself after all this culture with lunch at the expensive, but tasty, museum restaurant.

In the afternoon, I explored the historical centre, taking the usual photos of churches and colonial architecture. I decided against conquering my claustrophobia with a visit to the catacombs of the Church of San Francisco. As darkness started to set in, I then took a taxi to Larcomar, a modern underground shopping centre by the coast. Unfortunately there was no sun to watch setting, it was too cloudy, but the views out over the ocean were still fabulous. At Larcomar, I had a chai latte at Starbucks, dinner at TGI Fridays, and finished the day off with The Great Gatsby in English at the cinema. Yikes.

On day two, I hobnobbed with the Lima elite at Cebichería La Mar, ordering my first ever ceviche for lunch. I had the classic dish, with ‘leche de tigre’ – not, in fact, tigers’ milk but a rich lime marinade. YUM. I then spent the afternoon learning how to make truffles at the Choco Museo, leaving quite contented with nine coffee truffles hecho por Anna. Finally, on my second and final night, I went to the Teatro Municipal, where they were performing El Chico de Oz, The Boy from Oz, translated from the Broadway version into Spanish by my über-talented colleague. I can’t say that my level of Spanish was quite sufficient to cope with musical theatre, but I got into it as the story evolved. I was most moved by the penultimate song, “Antes de partir”, sung by the protagonist before succumbing to AIDS and passing away: “Once before I go, I want you to know, that I would do it all again … I want you to know, that I look back with no regrets”. An inspiration, and a unique experience overall. Thank you Marco!

So that was my experience of Lima! Very cosmopolitan, very expensive, but a nice change from my bohemian lifestyle of the preceding weeks. It was just a blip, though, as I next went straight back into backpacker land in the oasis town of Huacachina…

The catacombs beneath the Convento de San Francisco are said to contain the skulls and bones of around 70,000 people 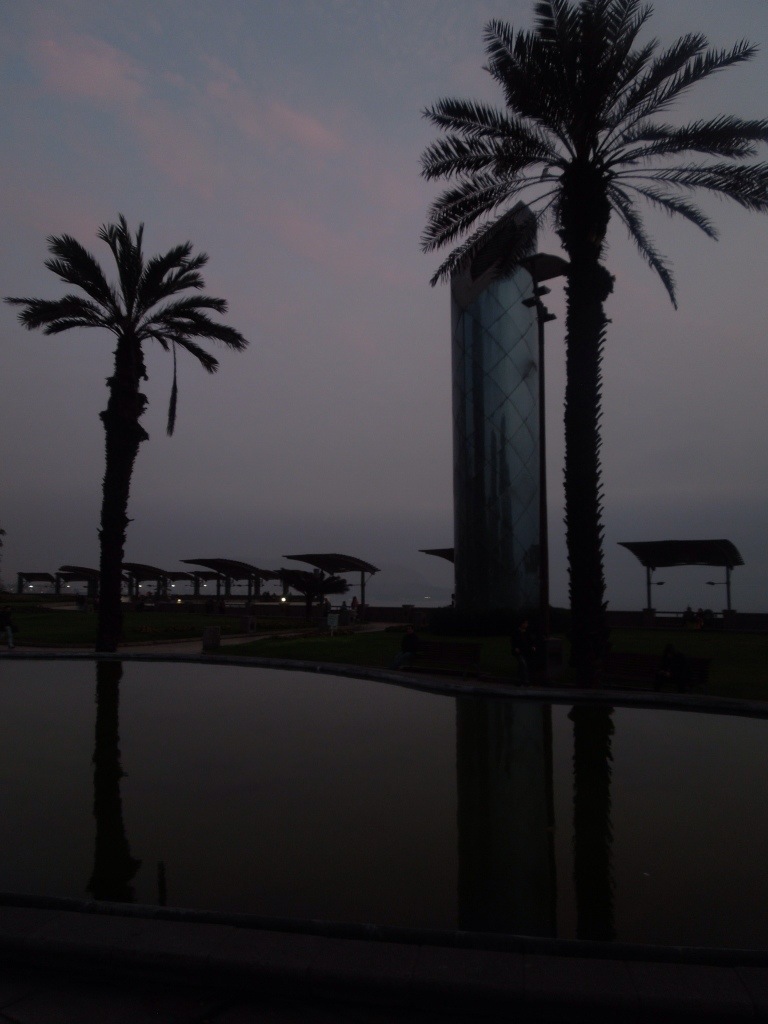 The shopping centre Larcomar lies along a cliff next to the ocean, in the Miraflores district of Lima

Sun, sea and sacrifice: the value of life in ancient Peru

Arequipa: I have seen The White City

Follow the fishes: on the trail of more ruins in the sand

Huacachina: Bananas and buggies in the Peruvian desert